It’s not very often that I’m completely blown away by a performer.

Buddy Guy completely blew me away.

I guess I didn’t know anything about him. While I know his name, and I know who he has influenced (Eric, Jimi, Angus, Stevie), but sheesh, Buddy is just AMAZING! 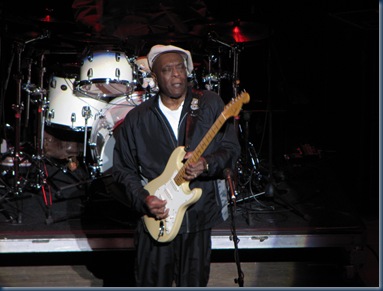 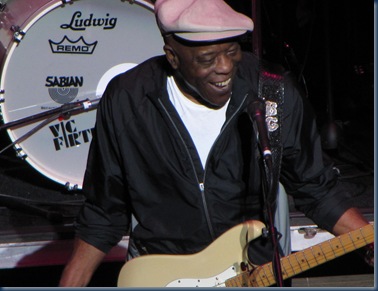 He was funny, happy, totally loves playing the blues, was a little dirty, loved his audience, and when he sang ‘while you were slippin’ out, someone was slippin’ in” it totally hooked me as a forever Buddy fan. Another favorite was the way he altered from face-blistering blues to soft and sweet soulful singing on “Skin Deep”. What great vocal quality. And his guitar tone? Ridiculous.

At 74, I can only hope I can play and have fun like that.

The only downer? He made it impossible for B.B. King to blow me away. I completely loved Buddy Guy and could have listened to him for 3 hours.

I went alone to this show. Got there early, got a beer, and enjoyed the scenery. 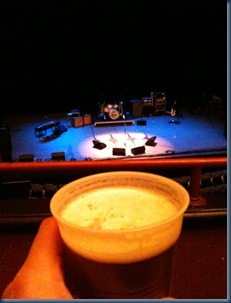 I’ve had a terrible week at work, rough time at home, and actually 2010 hasn’t been very good but was really hoping to get carried away for a night.

I sat next to another loner who is a self-proclaimed concert junkie. He’s seen so many shows and already spent $1K in 2010 on shows. He also travels around the world. Very cool life. Oh, and he has a rippin’ camera so I was able to have him send me a few (the nice ones on this blog). We also got to point to the guy next to us who wouldn’t stop talking during the soft parts. Some people’s entitlement stuns me. 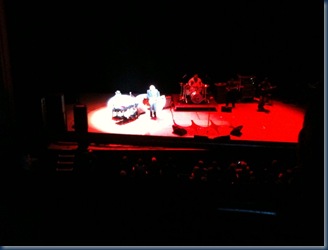 Buddy opened the show, played for over an hour, then we waited for B.B. to come out. 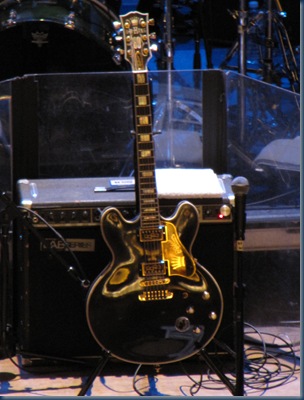 Then came B.B. He’s 84 so he’s quite old, yet obviously loves playing with his band and loves his audience so that was fun.

He did have some great licks but I just wasn’t blown away. I almost felt guilty. I mean this is B.B. Friggin KING! He was good, and his band was awesome…in fact I liked hearing his rhythm guitarist more than B.B. 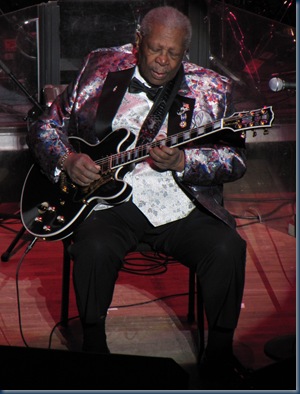 Here he is playing in his famous chair. 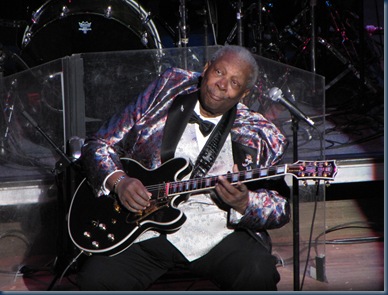 …and here he is making funny faces. I wasn’t sure if this was his “I’m playing the blues and I'm in the moment” or his “I’m really old and lost control of my facial muscles” or his “I’m crazy lucky to be playing all these years and have the right to make any face I want to, even if it’s because I’m thinking of the sandwich I had earlier tonight”.

After playing for an hour, he started talking while his band vamped. He told jokes and stories for over 20 minutes…and I could only hear 1/2 of it due to sound bouncing around and accent.

THEN? He was cut off! His ‘helpers’ actually walked back on stage, gave him the big “neck-cut” signal. He stopped talking, started apologizing, sang 2 bars of “The Thrill Is Gone”, then held his elbows up and was helped off the stage. Kind of a weird end to the show.

All in all it was a great show. I’d see Buddy Guy again in a second (I should have bought a shirt). But I’m not sure I’ll pay to see B.B. again. Please don’t hate me for that.

01/24/2010 was not supposed to be a big day for me. It was just another Sunday our worship band played. But when I got there I was reminded that our bass player, Mark, was playing his last day with us. 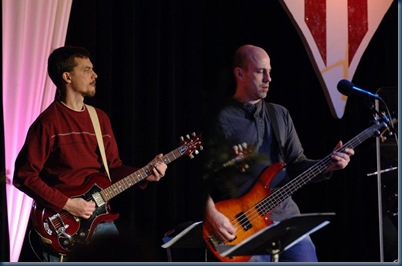 See, while I played it very low key, I was terribly depressed. I started to unravel my musical journey since 1998 and Mark has been a true constant. We’ve made each other better players along the way. We laughed and joked at truly inappropriate content for a church stage…even while on stage :-)  We went on vacations together, to guitar stores together, heck, he even was there when my 3 youngest were born. 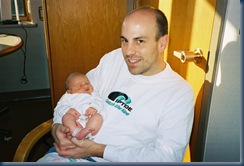 We met in the early days of crossWinds church, when we desperately needed a bass player…any bass player. I didn’t even care if he was any good.  I remember literally leaping  when I first heard him. You know the feeling when something just clicks…when there’s a chemistry that you know you can’t plan for but are fully aware of the potential… (sheesh I sound like a girl)

We played at church every week, then when we got enough players, every two weeks. From then until now I bet Mark and I have played well over 1000 different songs (which by the way resulted in me picking up songs immediately, but blocked my long-term memory from memorizing any song more than 7 days) 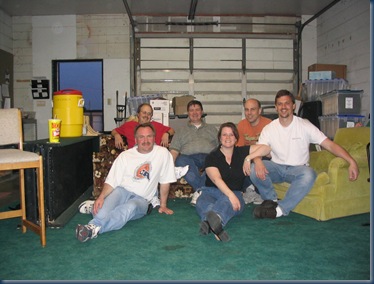 Here is a shot of the band back in 2004 but in the garage we rehearsed in since 1997.
When we couldn’t get enough from the 4 songs we played on Sundays we started playing for the student event “Riptide”, and called ourselves “Raymond’s Last Day”. For a short season we rocked the multi-church event and even broadened out to other church events playing songs we knew wouldn’t work at church (Creed, U2, etc)

Beyond church we played in Jesus Christ Superstar. Super hard bass parts…pulled off brilliantly.  Then later we would then make each other laugh with musical jokes by playing a Judas riff or other motif only he and I would know during church rehearsal (or during offering) 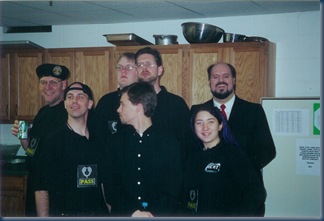 When I got a call to record another CD from a local artist Jake, Mark played bass…wonderful fretless work. Turned out so well we ended up forming a backup band called the ‘Coat-Tail Riders"’ since we played whenever Jake played. No coffee house was too small nor medical courtyard to hot to keep us away. We played, doubled, danced between notes, and simply had a delightful time. For a season Jake, myself, Mark, Karyn whooped it up and had a complete blast. Soooo fun supporting an artist like Jake with my bass constant. 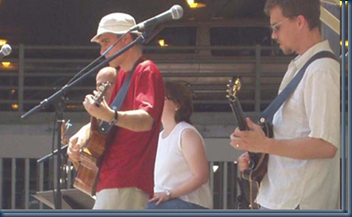 Over the recent years we haven’t done as much musically together outside of church (I tried to get him to play Rocky Horror with me but he couldn’t…could have been a blast) but we still had the constant of playing every 3 weeks at church. When we had a bass sub it was fun, but the music just didn’t gel the same. We knew what each other would play.

Most recently he’s been playing in a band I’ve grown to love, Pastel Black. 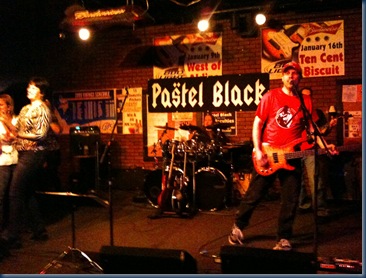 He’s wonderful in that group, too. Many times I wish I could play with him there but I wouldn’t get past the Eddie solos, so I spend time in the crowd enjoying the experience.

So now what? We’re not in a band for the first time in a looong time. We have a new bass player who will be great, but just not the same. I hope to find ways to play with Mark. I hope we play more, but I’m not sure I foresee any regular stint. When we sub together I’m afraid it won’t get much past the small talk.
I hope I’m wrong.

But I do know one thing…sometimes change sucks.
Posted by GregHint at 12:15 PM

I know we're not supposed to like satan. We're even supposed to say we dislike him. I hate him. Shit. I F'king hate him. (sorry I’ll try be softer).

Why now? Because he makes me wish I could quit leading the student band. Once a month I lead a group of middle/high schoolers in some rockin' worship songs (tonight included a rockin Jesus Freak). It’s taking more time than I want. I feel trapped. No-win situation. I quit and there is no band. Or someone fills in and since I drive my son anyway, I’d be sitting in the wings while they play feeling guilty.

What's the big deal? It's just kids, right? My time is worth more, right?

The big deal is that my oldest Coleo is the new drummer. He just turned 13. He’s had a crappy couple years in middle school. He feels like an outcast. A Loner. Through drumming, he’s been given a chance to shine in front of his peers. He's really good. Sure his transitions need some work...but so would mine if he played a song having never heard it (a side effect of me not wanting to lead. Procrastinate and who suffers? the players. My son).

The verdict tonight? He was freaking awesome!! (note: I use the word 'freak' because it's used by a girl at school that likes to stab Coleo with that word to make him feel rotten...she's an effer too. Maybe he can wear ‘freak’ as a badge of honor that reflects his love for Jesus and drumming).

If I followed my satan-inspired motivation, I'd just quit so I wouldn't have to spend the time preparing and teaching. After all, it gets in the way of … of … well I can think of a couple good reasons but all kinds of friggin worthess reasons compared to the value this gives my son.

You should have seen him. Beaming! Walking off stage with accolades he would NEVER have gotten if I listened to that prick satan. Here’s all the band lovin’ and rockin’. 2 high-schoolers, a college guy who all asked Cole to play…and an old man that while not cool, sports a cool guitar and can still pull off a decent lick or two. 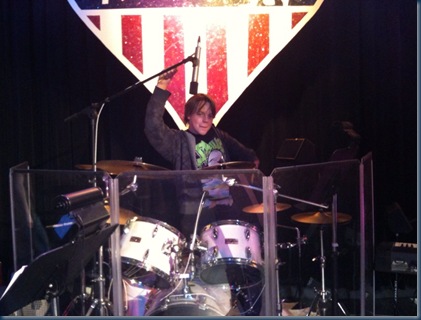 Here’s the Coleo rockin. Now, this is a staged photo but he was actually playing Jesus Freak finale standing up! Freak! (the good version)

It’s about doing everything possible to get this young man the grounding to face the world on his own terms with the self-confidence he needs to grow and become who he wants to be, who Jesus wants him to be. He already loves Jesus…and lets others know without shame (I could learn some things from him). He already loves drumming. He’s also learning Bass and while on the way home made it clear he wants to sing. A potential triple threat that could save some future middle-schooler from a journey of pain by showing he’s been there, he knows, and yes, that satan is a f’ker.

And maybe that’s all I can do. He’s already gone through a rough couple of years, so I can use my God-given gifts of teaching rock to help him become all he can.

…and satan…stay the F’k away. He belongs to Jesus and I will do all I can do to help him soar.
(Sorry for the adjective candor. In a future post we can discuss the theological ramifications of using vulgarity to describe satan…or of using all lower case in the name…which I was told is basically giving satan the middle finger)
Posted by GregHint at 8:13 AM