I’ve been feeling pretty blue lately, and when our Wednesday night church leader asked the following question, it really took me for a spin:

“What would your loved ones write on your tombstone if they could only could use one word?” 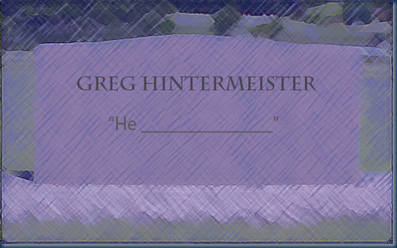 It was in a “5 Love Languages” class and the goal was to help identify what love language I used. If I could identify my kids/wife’s love language, I could use that and then maybe they’d write “He served” or “He listened” or “He cared”. It didn’t work. I Immediately went through the list of what would most likely end up etched in stone:

“He wasted”
I used to compose songs, record them, perform them, and communicate passionately to impact lives around me. I built a recording studio with the assumption I would be very active creating music. None of that has happened. I haven’t composed a song nor recorded my own music in years. What a waste.

“He wanted”
All the toys. The best. The shiniest. Oh sometimes I wander between guitars, keyboards, computers, gadgets, sound equipment, even a car or two depending on my mood, but I obsess about them, and get blue when reality takes the $$$ away I’ve saved for it.

“He stared”
How many times have my kids tried to interrupt me from staring at and caressing my iPhone? This addicting Internet toy improves the life of my loved ones how? But my how it fills the time between sleeps.

“He worked”
Big deal. So I made IBM some money. I've seen many co-workers come and go and within a month there’s no trace of them being there and in a couple years there’s no trace that their work ever existed. I also imagine my kids crying out “That’s not TRUE!”, then running up and sketching “…too much” in permanent marker. “There. Now it’s true”. Thanks.

“He didn't”
So many things I don’t take the time to do that really matter. But I don’t even know where to find the ‘what matters’ list. I guess I’ll just keep watching American Idol. At least I can check that off as something I did.

“He yelled”
At my kids, at my wife, at myself. Not all the time, just enough to keep the guilt flowing. I think I get control of my rage and then one of them will challenge me or interrupt me or make a could-be-cleaned-up-in-30-seconds mess that takes me to that place satan loves to meet me and have a double-shot-yell-for-nothing-and-leave-scars-on-the-heart-of-a-six-year-old latte. Mmmm. Yummy.

“He raised”
4 kids. Does that count? Even dogs have more offspring. Did I impact them? Sure, but did I do more damage than good? Was the investment worth it? Did I invest enough? Ask my youngest. My heart aches at how he tries to please me and I too quickly tell him to stop doing something that’s totally benign…like making mud soup outside. as Brian Regan confirmed, I care more about how my concrete driveway looks than the joy in my child’s heart.

“He loved”
Maybe, but not very well. I find people more irritating than worth while. I’m more of a stay-close-if-useful-to-me relational human than really interested in them.

“He believed”
Ya, but did I need 41 years to do something I started at 7? Especially when a successful believer would have a long wake of saved friends. Me? I just don’t get close enough to know if they need a savior, or frankly to care.

“He left”
The one sure thing I can count on. At some point I’ll have a real tombstone and leave someone behind. They’ll probably feel sad. Is that the one accomplishment I can count on? Awesome.

So, are you prepared if someone asks, “What would your loved ones write on your tombstone if they could only could use one word?”

Hard Core Impact on a Robot

“Hello. My name is Greg. I’ve been a youth group survivor for 23 years”.

That’s how I imagine some remember their church youth group experience growing up. Not me. My high school youth group became such a core part of my existence that its effects are still strong in my life. Pretty apropos that it was called “Hard Core”. Even more, the leader, Chuck, took the helm, guided this young sailor through the rocky shoals that could have wrecked me early on. I now reflect on how I started sailing this sea of life with a great captain to guide me.

This is really for all youth leaders that wonder. “What does it matter if I show up tonight to lead these kids in worship and other youth group mayhem? It’s not like they care.”  Trust me. It matters. We care. Show up…please.

Hard Core Effects on the Life of Greg:

I met my wife there!   Hard Core had coffee houses and I had just joined a band with my friends Eric and Pete. I didn’t know anyone else at the time, but I played at one and met Karyn. 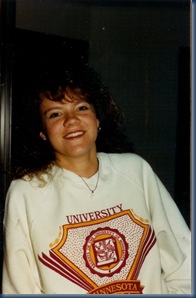 If memory serves, it was the classic “I saw her in the crowd dancing to our songs…it was love at first site”. Not many people know that when I was 16 I prayed that I would meet my wife early so I wouldn’t have to do the “dating” thing. I remember deep talks about relationships, intimacy, self-control, all of which were instrumental in “waiting” for the wedding.

Hardcore gave me confidence that I could actually play music and rock for Jesus. 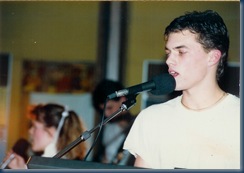 I remember sitting with Chuck in my dad’s ‘84 Toyota Camry and listening to “The Rock” (click to listen now) that I recorded in my little studio to a cassette. He was very supportive. Now music is a core part of my life. I’ve toured the world playing music, performed throughout Rochester, composed many songs and full soundtracks, built a recording studio serving startup bands and players, and am currently serving in my church, leading a Sunday band and the student band.

I finally rid myself of my obsession with Prince. Since 8th grade I bought everything having to do with Prince and it shaped my thoughts and actions. Hard Core gave me the guts to literally burn it during a cold Hard Core night. I still remember the pain when Karyn tore the Purple Rain album sleeve in ½, but now I think of how liberated I was after that. It let Christian music in so I could be more open to Jesus. It was a HUGE thing and helped me in my journey.

I’ve got 4 kids now!!! Not that having kids was the focus of Hard Core but adult male role-models on how to treat women was. Chuck treated his wife well in front of all of us students and his little one that put some seeds of wisdom in my brain.

I learned the value of quiet time. We went to some farm with a really old piano. It was winter. We were told to walk by ourselves and reflect. It was almost like we were in training, never just on a “youth trip”. Trips like that were always great fun, but a sense of urgency or importance or something made it clear we shouldn’t fool around with this Jesus thing…that we should get with it and never look back. 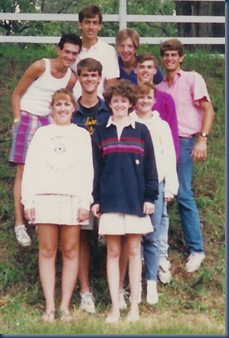 During Hard Core I experienced times of worship so intense! If I would have known how rare that would be through my life, I would have savored it even more. We learned that students shouldn’t be toyed with when it comes to worship and Jesus. We were so ON FIRE! I still remember feeling it was like the early church. We all went to school together, played after school together, went to church together, small group together, we went out on weekends together…and we were all believers so it was one of the safest environments to grow up and mature in. We weren’t toyed with. We were told one night, “he comes like a thief in the night, to steal, kill, and destroy” and if we didn’t help each other and become strong believers, we’d be in big trouble. This was all an experience I’ll never forget.

I Remember being given a “Sailing” painting by Chuck before they moved. I still have it. It reminds me of the impact he had on me and the impact I can have on students now. The following movie is the song Chuck wrote inspired by that painting and other photos from Hard Core. 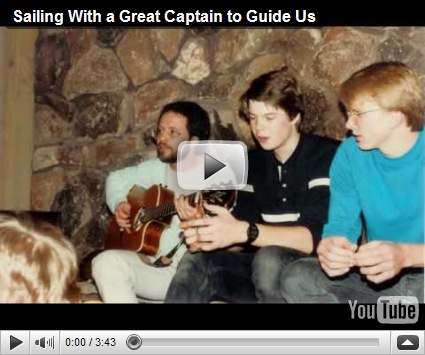