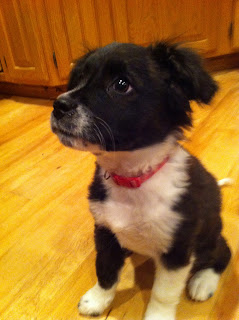 When I think about training my pup, the first thing I think is:

"I want my dog to be the best, most joyous dog she can be"

When I think about living my life, the first thing I think is:

"I want my life to be the best, most joyous life it can be"

For example, if I train my pup by controlling her, planning every outcome, demanding a response and giving her a leash pop the instant she does not respond to a command just so my expectations are met, I am acting like I'm her King…demanding her respect I feel I'm entitled.

However, if I train my pup with patience, guiding her one small step at a time, praising her for what she does well, and think of her needs, fears, and strengths in advance to help her be the best she can be, I am acting more like a servant...and I end up with a richer, deeper relationship.

What method is better? I'm learning that serving her makes her a better, happier, and healthier pup. Sure if I "King" over her I'll get results, but I'm looking for more. Yes I want her well-trained, but I also want a much more rewarding relationship.

In a similar way, if I control my life (and those in my life) by planning every detail, demanding a response from those around me (or God) and reacting negatively until my expectations are met, I am living like a King of my own world…demanding the respect I feel I'm entitled.

However, if I serve those around me, help co-workers succeed, love friends, be patient with strangers, guiding and praising my kids strengths, thinking of my family's needs and fears to help them be the best they can be, I am living my life like a servant…and end up surrounded with gratitude and rich, deep relationships.

Its almost like the way I train my pup is a mirror reflecting how I'm really living my life, regardless of my outward appearance. It's easy to see what drives me (patience or impatience, loving or demanding, serving or controlling) when I'm "just" training a pup.

It makes it possible to ask myself if that's how I truly approach my life...

Maybe I should pay attention to this dog training…

…maybe we all should

What do you think?
Posted by GregHint at 9:10 PM

Few moments in my life are better than when I'm belting out a song on stage at the top of my lungs just after pulling off a great guitar solo. This happens regardless of the stage I'm on...including our church stage. It must be a common feeling since many recent worship songs seem to be designed so worship guys can wail their voices and guitars...pouring every ounce of energy from the stage into the audience.

The songs are fast, guitar-driven, and in a key optimal for someone like me; a guitar-playing tenor who loves riffing and singing high, loud, fast, and energetic. When the song is done, I feel invigorated because I've given all I have to help the audience enter into an immersive worship experience.

It's an awesome way to serve.

While I think I'm a servant, am I really a savage?

This struggle of servant/savage has been rattling around in my head for a couple years, and maybe I'm extra sensitive because I live with a true worship leader...my wife. For her, some of these awesome-songs-for-guy-rockers-to-sing are not invigorating at all...they're frustrating. Turns out that many of these songs are just too high to sing…and instead of being immersed in worship, many women are immersed in frustration.

I've noticed it too. When I'm in the audience and singing away happily, I sometimes stop, look around, and see many of the women are not singing. They're somewhat involved, but they could be immersed at such a deeper level.

The final straw for me was last week when I lead the student worship band. The group picked a song, I listened to the CD, liked it, and practiced. The result? Awkwardness. The female worship leader was very uncomfortable singing the chorus because it was just too high.

It didn't even occur to me to run through the song with my wife. Now, that's not surprising because of my well-documented lack of concern for most all other people, but for some reason being the cause of this awkward worship moment really bothers me.

I'd like to think I was just being naive.

But to be honest, I wonder if I was being something worse? Did I choose the song key because it was fun for me? Did it sit in a great range for my voice? Was I choosing the song not based on how it would help both men and women enter into deep worship, but because I'd have more fun performing it in that key? Or maybe because I'd sound/look better performing it?

Am I really a savage?

If I put my personal benefits above providing a song designed for women to worship through, how different is that from when women weren't allowed to worship at all…or were treated as property? Do I have a sense of privilege that because it's ME singing and preparing the songs that I'm entitled to do the song any way I please?

Am I actively (savagely) preventing women from deep worship solely because the melody is too high? By feeling entitled to play the song that's best for me, am I being selfish, arrogant, and disrespectful to the women in our church?

If I can convince myself that my song/key choice is not for my personal benefit, then am I putting too much weight on the entertainment value? When confronted with the opportunity to change keys of a song so it's singable by all, I instantly think one of these excuses:


I'm starting to wonder: If we as men are to love women like Jesus loved the church, wouldn't our primary purpose be to do whatever it takes to enable women enter into deep worship? Shouldn't we as male worship leaders be OK singing a song with a smackrel less energy so that woman can enter into deep worship, too? I know it's a sacrifice, but I think Jesus showed how far sacrifice could go, and He went a tad beyond singing a song in a lower key.

I'll be the first to admit that if we're attending a stadium concert, these songs are perfect. The purpose of a concert is to move the listener, entertain, and create memories. However, if we're in a church service, and the primary purpose is to enter into deep worship, then shouldn't the songs be in a key that is decent for both men and women? And if the songs have such a big range that they really can't be changed, maybe they're just horrible worship songs? Further, shouldn't we as songwriters be writing songs tailored to women singing? I know. It's hard. I've been writing songs for 27 years and it's always hard for me to pick a key that works great for my wife to sing.

…as I've re-keyed worship songs when my wife leads, it turns out that if a song is comfortable for an average woman to sing, men can sing it too.

I wonder…did God design our vocal chords knowing that if men wrote songs as a servant for woman to worship through, we'd at the same time be writing songs that we could all worship through? Is the offset of male/female vocal ranges specifically designed so that men would need to serve women in order for all of us to enter into deep worship together?

What do you think?
Posted by GregHint at 6:00 AM