It’s been a tough month. Of course as I type this I can hear anyone who knows me and our family saying, “He’s an idiot. He’s got EVERYTHING. What does he have to be sad about?"

…and they’d be right.

I’ve pursued happiness in a lot of ways, and to my surprise I’ve achieved many of them already. (sounds arrogant. I don’t even like typing this, but maybe I’ll uncover some truth along the way)

Maybe it’s what I haven’t pursued. Maybe it’s that since I’ve only had a written ‘plan’ when at work, and listed my contributions when at work, that i’ve ended up depending on my life satisfaction based on work.

How screwed up is that?

I love creating. I love being a part of a team/club/group that all is passionate about accomplishing something, creating something wonderful. I’ve also found I love it when I help others be successful.

I don’t feel I’m doing any of that right now.

Work is…unexplainable. Even though I’ve received great reviews, I am constantly anxious about becoming irrelevant…to the point of one person’s side comment ruins me for the rest of the day…makes me question my judgement in how I direct my work...and destroys any family connection time at night.

Music is…nearly nonexistent: I’ve recorded and performed all over, but am wholly sad about what I’ve done. I feel I’ve wasted my abilities because I’m not disciplined enough to schedule time to compose. Sure I play at church, but I’m completely replaceable…it’s not something I can uniquely contribute to.

Kids are…a miracle: They are turning out to be amazing people, but my one purpose is to raise them in a godly way, and I’ve never read a bible verse at dinner. I’ve never showed them how to study the bible. I talk about managing money all the time, but have I even walked them through a budget?

Wife is…perplexing: I don’t really know why she’s so kind to me still.

Friends are…??? I don’t even know. I have a couple guys I can call on, but I look at my brother, or look at others and they have a rich community of friends surrounding them. Wow would that be nice. But who has the time for that? I guess they do…I have no idea how though…it’s not like I’m spending load of time doing stuff I love at the expense of others...my time is spent accomplishing tasks that it seems I need to: driving kids (although my wife does tons more), homework, work work, travel (for work), dishes, house maintenance, outside house stuff, and the time I have left I try to reconnect with my wife.

What bothers me most is that it looks like I’m playing…the martyr: Sacrificing my time, my opportunities for others and then in some dark corner letting this sadness grow to show myself how good of a person I am.

…and then just yesterday I received an old obituary my dad found of my great, great grandma:

Jan 8, 1932:
Born in 1850…traveled to America in 1870…married in 1878...Mrs. Hintermeister was one of the best known women in the Taylor Ridge community. All thru her life her first thought was for the comfort and happiness of others and she practiced much self denial for the benefit of those she loved. Thru her later years she took special interest in the young people of her community and rejoiced over their achievements.

"Her children shall rise up and call her blessed," for they can truly say, "She hath done what she could."

She practiced self denial? Took special interest in the young people of her community? Rejoiced over their achievements?

Doesn’t say anything about how productive in the community economy she was…what achievements she made…what positions she held...

…it says she was one of the best known because her first thought was for the comfort and happiness of others...

I have so much to learn. I've got to get better. I don’t even know where to begin. What would my obituary say? I thought about it once and I don’t feel it’s gotten any better. I did think about blogging about how I can help others and then list the results, but that seems vain. I could blog about what I’m grateful for, but that seems like I’m bragging (I have this, that, the other thing, …).

Maybe I should just look in the mirror, tell myself to shut the f*ck up, grow up, and start….

By the time we landed in Aruba, we had already had quite an adventure in New York City on New Years Eve. To be honest, we wondered if we would find this island as wonderful as the island we visited the night before.

Then we saw the sunsets. And by the time we left, we had remembered that if we pause each evening...together...thinking about what we have...who we love...how precious our time is...we will enjoy life more, appreciate the moments more, and not let little troubles cloud our attitude...

...after all, as you can see...a few clouds makes the experience richer, more textured, all around better than if it was only a clear horizon with no context. 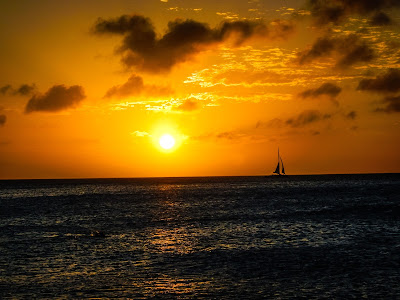 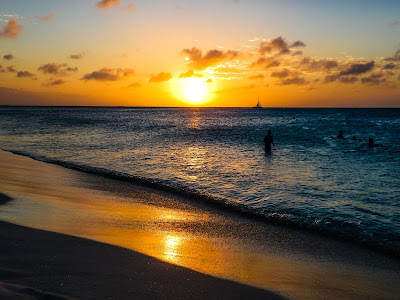 The glistening wet sand as the waves retreat into the water added a unique sparkle as if we were witnessing a 'double' sunset. 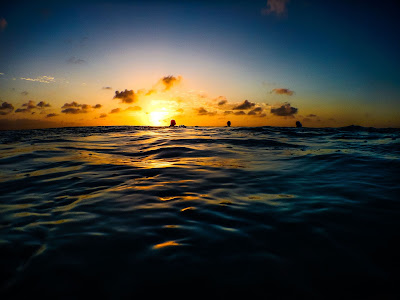 The ability to float in the very salty, perfect temperature water and take in the sunset was unforgettable. I love how the silhouettes of my kids reinforce this immersive experience we had...all together. 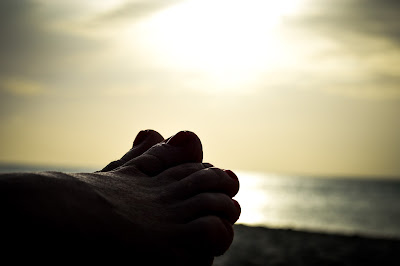 Some sunsets were enjoyed laying on the beach chairs and letting the trade winds keep us perfectly content... 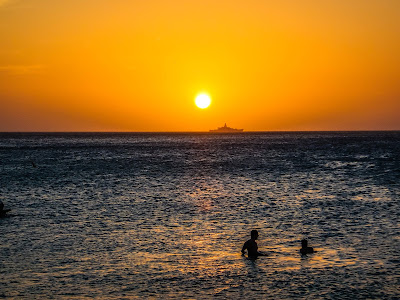 Even the US Coast Guard (who patrols the waters between Aruba and Venezuela) added to the beauty of this night's nearly cloudless sunset. 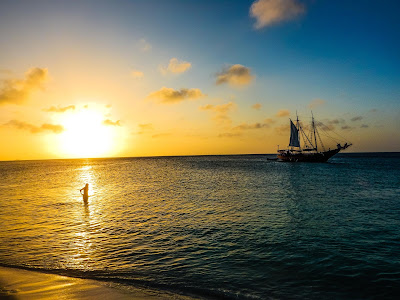 Still other nights the pirate ship, announcing a night of fun was about to commence, provided a stunning pairing to the sun as it set. 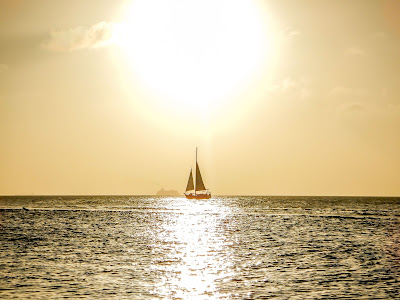 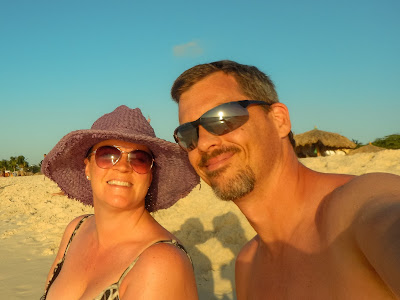 I learned early to turn the camera around and capture who I get to share these sunsets with. I think it just makes them all the more better. 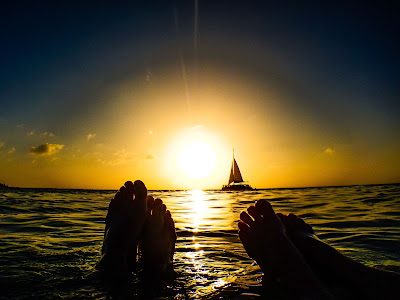 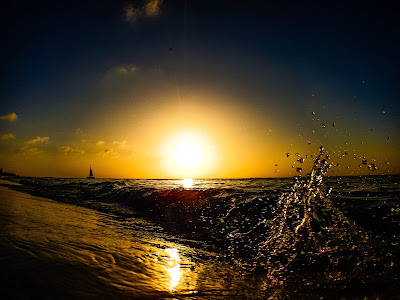 One of my favorites. My waterproof camera provided some fantastic sunset photos...I love how the waves sparkle like diamonds in the setting sun light. 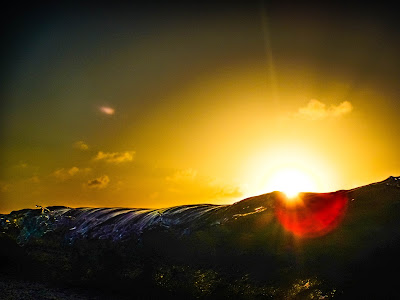 ...or this one that shows how the setting sunlight is still strong enough to pierce waves and show wave-innards. 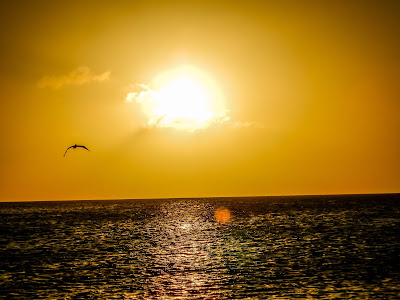 Or how this sunset captured native wild-life in flight 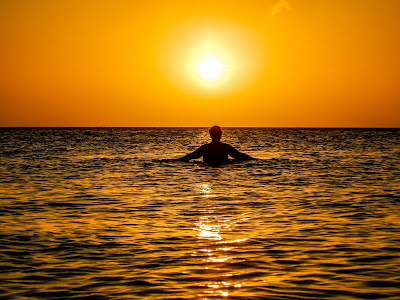 ...or how my wife simply paused...relaxed...focused...and let herself be carried away by the setting sun 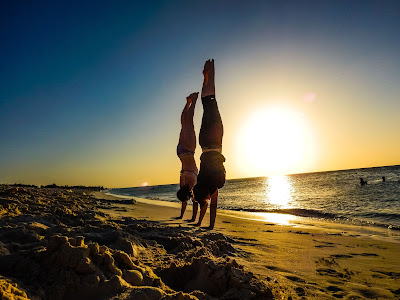 Of course my girls couldn't resist taking a handstand photo with the sunset! 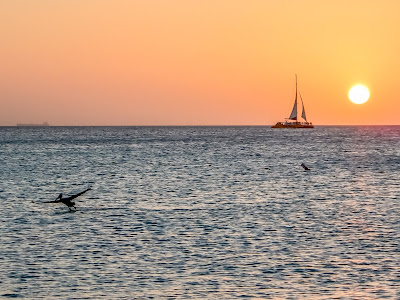 Last sunset of our trip was also enjoyed by pelican and sailboat. I honestly think we had the better view...the sailboat people didn't have an awesome sailboat in their view! 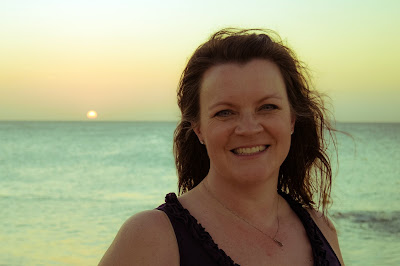 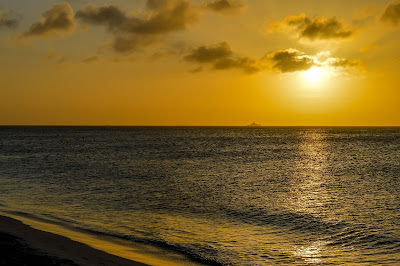 Last view, a touch of clouds...adding to the texture, an observation I forget far too often. 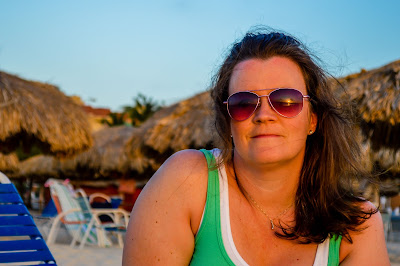 A happy, beautiful, content lady at peace. That is the goal, after all, isn't it?

Posted by GregHint at 4:08 PM No comments:

It started with a wash of panic. All that I planned! Ruined!

...then I took a breath...and thought, "Lets see where this takes us"...maybe this could even be an Opportunity Curve

...then I was nice to a stranger

...and ended up guiding our family through one of the best evenings of our lives...

...and NONE of it would have happened without first getting an email with bad news.

I opened the email from United. It listed our flights to Aruba: Minneapolis to Chicago to Aruba. My eyes narrowed. The email said the plane from Chicago to Aruba, painstakingly scheduled to perfection to arrive just when I wanted, was canceled, and we were rerouted from MSP to Denver, to Atlanta, to Aruba...arriving a whole day late.

Luckily it was months until the trip, and I knew enough about well-meaning, but inferior computer algorithms that with the limited data it had, was just trying to reroute us the best it could. I settled my panic, and called a human at United to work through a solution that worked for all parties. I even offered to travel a day early so we could arrive to Aruba on time. It would cost me money in hotel, but my top priority was to get to Aruba for the full week of fun.

The lady at United received my diplomatic offer well, and even accepted my request to travel the night before on an EARLIER flight...just in case of bad weather we would have a whole additional flight to get to our connection location.

We were all set.

Fast forward to 3 days before our trip...

...it finally sunk in that since our overnight was in Newark, we could, possibly, visit Manhattan on New Years Eve. The family was curious, but naturally concerned with the world saying that NYC is not for the feint of heart on new years eve. (and was it even safe?)

BUT, since one of my only declared missions for our family is to offer experiences they wouldn't normally get, I decided to lead the family through a whirlwind tour of The City.

Took a cab from the hotel to Newark Penn Station...and bought MTA passes to World Trade Center (actually, we were planning Times Square station, but on the way, my youngest seemed sad that he wouldn't see the Statue of Liberty...and so adjusted our destination on the fly... 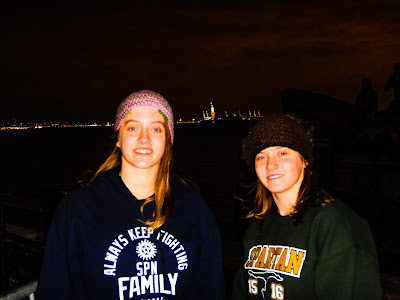 My ladies in front of Lady Liberty 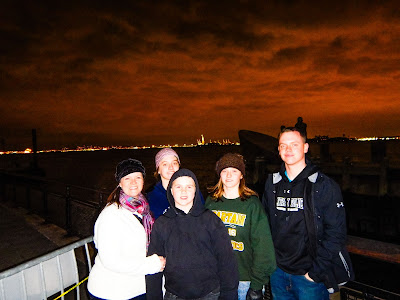 The family in front of same...with cool clouds all lit up


We saw ground zero memorial, the Freedom tower, and the financial district (along with the NY Film Academy). 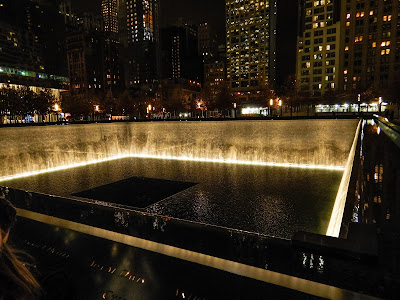 Somber...even on New Years Eve. My son the MP sure seemed deep in thought, "This is where it all started for me" 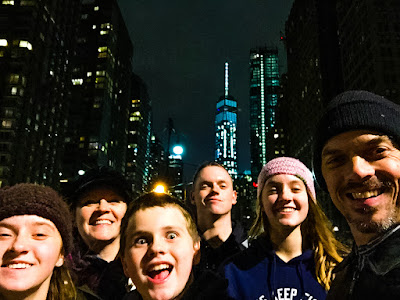 Freedom tower...and a family that seems always up for adventure 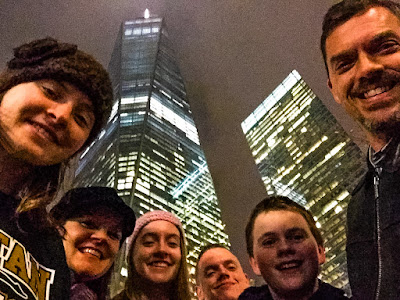 We then hopped the subway up to Central Park, walked to a friendly McDonalds, and then to Rockefeller Center to see the Christmas tree all lit up. My wife has wanted to see this for years!

...but...they had already turned it off. Sad faces all around. 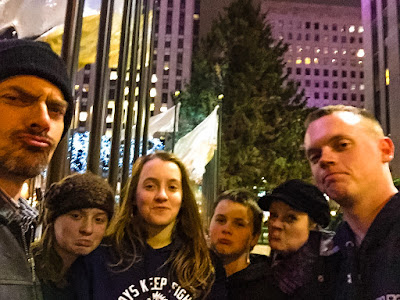 Others from Europe were sure disappointed...so we all sad-faced.

Ah well...we still had an awesome time walking. Next we saw the Apple Store on 5th ave, and walked Central Park (just down the south-east stairs, through the park, and up the south-west stairs).

Next we walked down Avenue of the Americas to glimpse at the Times Square lights. We weren't allowed to enter (so secure...we felt really safe!) but at 42nd street could see the ball before it dropped! 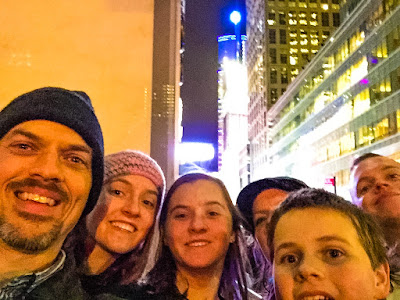 See it?!? That blue blob in the upper center.


Our last stop was the Empire State Building, always a favorite of mine. 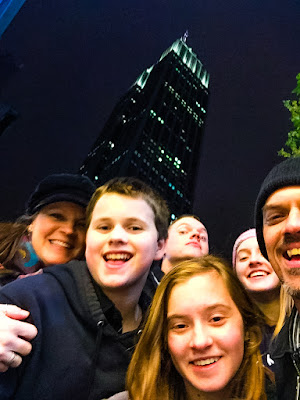 One last photo with the family 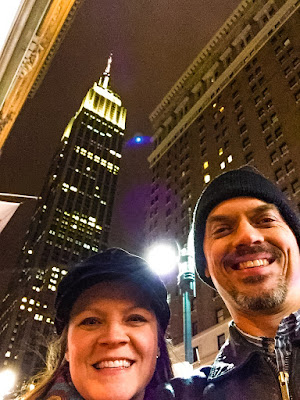 ...and of course with my lovely Lady. Love traveling with her


We left NYC at 11:30, (forums suggested subways are clogged after midnight) and celebrated 2016 at a small transfer station in Newark.

We all got to sleep around 1:30am. We all had an amazing whirlwind tour of NYC and can now say "Oh yeah, I've done NYC on New Years Eve!"

I'm SO happy this adventure happened...I'd like to take full credit but was just taking advantage of a seemingly terrible flight detour, and ended up with an adventure we'll never forget.

...and it was just the beginning since the very next morning we flew to ARUBA!!! 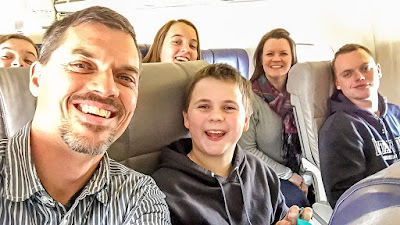 Posted by GregHint at 3:10 PM No comments: