After 3 years of recording, edit, and mastering, my next album, "Life Behind The Master", is now on iTunes, Amazon, CDBaby, and streaming services like Spotify (coming soon). Interestingly they are all selling at different prices: $9.99, $8.99, and $5.99 respectively. My distributor is CDBaby.com and I simply love their service.

The album cover contains dozens of photos spanning all aspects of my life... 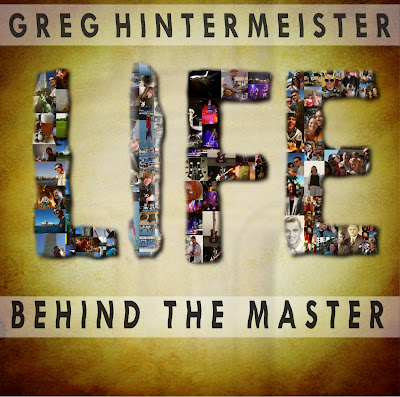 This collection of songs spans so many topics that I felt it really deserved the word "Life" in it. It ends with "…Behind the Master" because it's a rough translation of my last name…Hintermeister "master of the back lands" (actually, the literal translation is "Master of the behind", but that would result in ENTIRELY differnent kinds of songs and artwork...maybe a future album :-)   ).

I've always wanted to title an album with "...behind the master" not only for its connection to my last name, but also because it describes how I try (but mostly fail) to live my life of faith…following Jesus and having him guide me through most everything I do. You might see the ever-so-faint cross in the cover?

I love every song on here, and they range from hard rock to 'anthem' rock to pop to piano solo to acoustic guitar. Some of these songs I wrote for myself as a reflection of my own life...like "Sunset Chairs" and "Spiritual Honeymoon". Others I wrote to accompany live acting to further the emotion of the story...like "Gospel According To Me" and "Everything's Gold". The songs "Soundtrack to My Life" I wrote the music for based on awesome lyrics written by Tammy St. George reflecting how the music of Bon Jovi inspires her. I wrote "Pocket Man" for my then 3 year old who...well...loved pockets! He also guest-sings on that song.

I'm quite excited to have these available.

I recorded all songs in my Hint of Light recording studio. I recorded the audio through an old Soundscape hard disk recording unit, recorded MIDI through Cakewalk Sonar 4, and mixed it down through my Yamaha 01V digital mixer. Most of those are very old and through this project realized I need to upgrade my entire system.

Mastering was quite an ordeal. I really wanted to do this myself end-to-end, but just couldn't get these songs sounding great compared to other commercial CDs. I finally found a tutorial and a limiter plug-in that I adore…and found my way to the open-source tool "Reaper" that let me do all my final EQ, compression, limiting in real-time. Let me tell you, after doing most mastering using older open source like Audactiy, using a tool like Reaper with the plug-ins I found was simply revolutionary.