My youngest gets a lot of leftovers: Clothes, toys, and too often...my leftover time. I feel bad about that so I try to specifically focus on him as much as I can.

Last month, when the girls were building a toy house on their own (very cool and another story involving wood they found, grownup tools, and custom paint), he asked if he could build a race-car track.

I instantly thought “hot-wheel” track. Honestly, I hate those little hot-wheel racecar tracks. They're tiny, warped, and rarely perform as promised. However, my youngest has an amazing mind, and was thinking FAR outside the box my mind was bouncing around in.

He took my hand and headed towards the outbuilding.

"That's what I want to build my racetrack out of. Can we cut it up?", as he pointed to an old piece of siding. 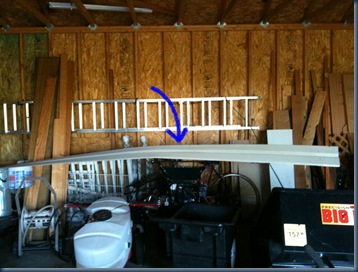 "No". I said immediately. You see, that's the default answer I give him...and it ticks me off every time I say it. This little man has a brain far superior to mine and I am constantly standing in his way to reaching his full potential.

Sidenote: I'm not talking all cute when I say his brain is smart. It's pure fact. It’s wicked smart. I've tried to put it in a way he'd understand: His brain learns at twice the speed of normal brains. It needs to be fed with much more brain food than our average brains. Part of the reason he gets into so much trouble is simply his brain trying to be fed...I can't wait to see what he does in his life!

But that day something in me snapped free...and I was able to break away from my "I'm-busy-and-it-sounds-like-a-lot-of-work-and-I'm-not-even-sure-if-it's-possible" box.

I quickly said, "But, we can use the whole thing as a track".

His eyes lit up.

We brought the siding to a tree limb, balanced it so the track would curve from the limb down to the grass.

He let the car go.

In 0.632 seconds the race was done. Not very satisfying.

Then, from what I can only describe as a son-to-dad mind-meld, I thought...why don't we just make the track longer?

And that's what we did. I climbed to the outbuilding rafters, found a bunch of our old siding, and got about 6 additional pieces down. 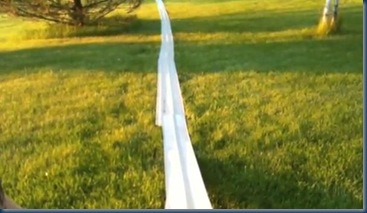 His brain was very pleased with me.

We discovered the grooves in the siding made perfect race-car tracks. The grooves even made it easy to connect one piece of track (er, siding) to the next.

Not only did we make the track well over 150 feet long, we added a starting gate that accelerated the cars, and a end-of-race jump to put an exclamation point on the finish line.

Now sit back and enjoy some brief highlights of the first annual Hinter500 International Raceway Championships!