It was supposed to be a short jaunt to a waterfall inside the Smoky Mountain National Park.

The drive to the trail was breathtaking... 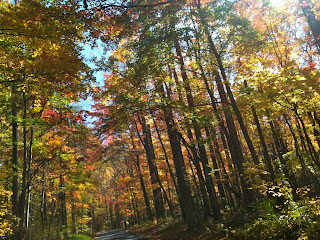 The kids were excited...even the oldest...as it reminded him of Canada. We jumped out of the car to hike to Rainbow Falls. I had packed 2 bottles of water. All 5 had their hiking sticks foraged from the last successful .75 mile hike 2 days before.

Just 5 minutes into it, I hear, "Hmm. I wonder if the whole trail is up hill?"

It never occurred to me that hiking to a waterfall would be up hill. After all, the point of a water fall is to see the water...falling. And to do that you want to be at the bottom of the falls. 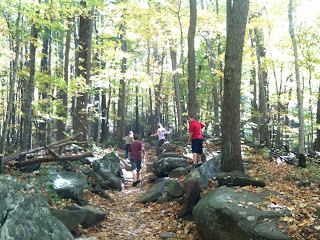 Now at this point you need to know we are not hikers. We love nature, love to explore, but we do not hike multi-hour trails.  My past explorations took me to 5 different continents for work, but all walkabouts were within a city, and essentials like water, bathrooms, wifi, and coffee were all available at a moments notice.

It's you and nature. survival of the fittest. Did I say I am not among the fittest?

The first 30 minutes was really great. We followed the mountain stream and saw many stunning sites. All 6 of us were skipping along and taking some photos of the adventure.

The second 30 minutes...reality set in. It was constant effort to climb the trail up-up-up. To make the trail not as steep, the trail tacked back and forth. This was nice for keeping pace (set by our twin gymnasts...much more fit than the rest of us), but it also made the distance longer. I've explored cities and parks before, and always seem to make good time, and at the beginning of the hike when the sign said "2.6", we figured it was not going to take much time at all...maybe 40 minutes.

At the end of the first hour, we meet a couple going down and asked how much farther. Surely based on our estimates we had walked at least 2 miles.

Their response? "Well, you're about half way there".

Impossible. In suburban 'feels like over 2 miles'. But we were making about 1 mile an hour up the trail...traversing rocks, roots, and an occasional slip and fall. After we heard that, they must have seen despair because they said "but there's a couple of 'small' falls before you get there"

Third 30 minutes: youngest falls again and splays out yelling "I AM SO DONE!". We fell done, too. Hearts pounding, sweat pouring...I know it's only been 90 minutes but up hill the whole time not knowing how close the goal is...we became disheartened. The trail is tacking away from the stream so we know we are nowhere near our goal.

Another couple pass, and say there is a bridge with small falls 10 minutes up. We now have our goal. The last bit is hard until the trail tacks towards the distant stream.

Then we hear water. Lots of it. Hitting rocks!

We come across a beautiful rocky falls and a small wooden bridge the crosses it.

Well, sort of. You see, Rainbow falls was another grueling 40 minutes up the mountain. We made a critical family decision...that has become a pattern for our lives: 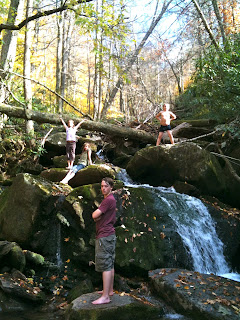 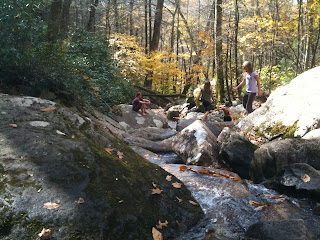 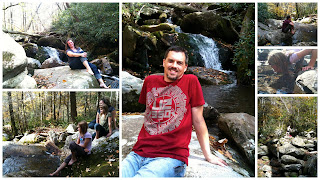 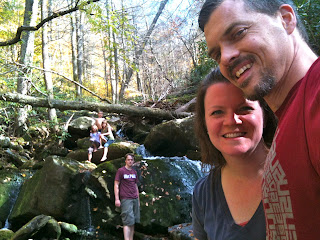 We must have frolicked in New Rainbow Falls for an hour. The water was freezing but completely refreshing. The rocks were challenging, but the eddies and pools were fantastic to wade through.

After fully satiated, we gathered ourselves, and walked down.

Now we became the 'experienced'. Others asked us, "Are we at least 1/2 way there?". Our response? "You have another hour. However, we newly renamed the small bridge falls 'New Rainbow Falls', and we think you will enjoy that destination just as much as  we did".

All that we encountered smiled. I think they, like us, got more than they bargained for with this hike, and having someone give them permission to set a realistic goal that wouldn't kill them was delightful to them.

As we reached the bottom, we were exhausted, but I felt extremely proud of our family. They pushed through some very tough moments, and got to enjoy a wonderful waterfall experience.

Oh, and just as we were leaving, we heard in the distance a comment from someone we met on the way down, "Yeah, ...we reached New Rainbow Falls...enjoyed it so much...then returned".

Looks like we put our mark on the Smoky Mountain lexicon.

I love this family.

How about you, have you encountered a challenge that ended wonderfully?