This concert was a "Full Circle" type of experience.

And here's my program to the very first George Winston concert I attended: 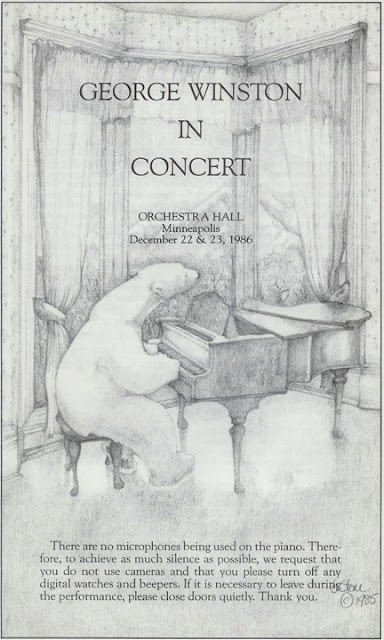 For both of them, Karyn sat by my side.

It's just for the first one, it was the very first date Karyn and I went on.

Nearly 25 years ago to the day, I asked Karyn out for a date. We met earlier in May '86, and in what will have to be a deliciously fun future post, we had a VERY interesting summer of music, Valley Fair, relationship-drama, church, 4th of July poster-making, midnight excursions, and...the "other" boyfriend.

At her madrigals and choir Christmas concert in the Ridgedale center court, I asked Karyn to the George Winston show. My logic was that even if she was not sure, she'd probably say yes to an expensive concert so it would at minimum get me one date :-)  (just enough to let her experience my HinterMOJO)

Luckily she said yes, and in Dec 23, 1986, we went to Orchestra Hall and listened to George. I sat on her right, and I remember holding her hand for the first time and putting my arm around her (which, I quickly learned, is NOT a comfortable position for your arm to be in on its own...but when it's surrounding a creature like Karyn, it becomes totally worth it)

From that first date, to now...25 years later, we have traveled on a crazy-lovely-dramatic-musical adventure, and I wouldn't trade a second with this lady.

The music that George played at this latest concert brought us back to our early dating. Funny how music can be such a potent memory and emotional amplifier. I probably hadn't heard some of that music by Karyn's side since the last George Winston concert.

His playing is so clear, crisp, and dynamic. Sometimes he play loud and it sounds like a guitar amp in over drive. His pianissimo is so quiet, but has complete clarity. When he needs it even softer, he reaches into the Steinway 9' grand, mutes the strings with his palm, and continues to play... evoking images of scampering autumn creatures. Sometimes he'll pluck the individual strings for a sitar effect.

Simply amazing. His playing seems to reflect  the life Karyn and I have formed:

Sometimes we're curled up in a cold December night listening to the wind...

Sometimes we're exploring the forest...sometimes lost and a little scared...sometimes in awe at the life that surrounds us...

...and sometimes we're emerging from winter into spring...and enjoying every essence of life.

But always she fills my life with beauty, wonder, and love.

I've said it many times before, but to sum up, she simply adds the sparkle to my life.

If you have never heard George Winston's music, take it for a spin. December is my favorite album (probably because it was our favorite) but he's got a lot of great work.

Thanks George, for a great concert, and great memories.