The HINTERgarden: A Bountiful Harvest

At the beginning of the summer, the missus stated her desire to have a garden. If memory serves, it went something like this:

HER: Honey, I think we should build a garden
ME: But...that's why God invented Aldi
HER: Do't get smart. I want a garden with the following specifications:

1. A decent sized plot tilled with rich soil
2. A protective mechanism to protect the veggies from the animals
3. Compost to add nutrients in the soil
4. Organic seeds
5. A bountiful harvest

ME: What do you want to harvest?
HER: Pumpkins. And tomatoes. And maybe some strawberries

At summer's end, the dialog went something like this:

HER (to herself): I can't believe he didn't take the hint. What's with him?
HER (to me): I really wanted a garden. Maybe we can get it together next summer.

ME: Come on! Let's harvest!

ME: (to self) What's her problem? This garden meets or exceeds all design specifications!?! How can I figure out who is right? I KNOW, I will ask the Interweb to vote!

ME: (to you): Does this HINTERgarden meet the design specifications given at the beginning of the summer?

The HINTERgarden - 2011 Requirements and Results

To accurately vote, you must first study the dramatically impressive results with a scientific eye. Here is the expert garden: 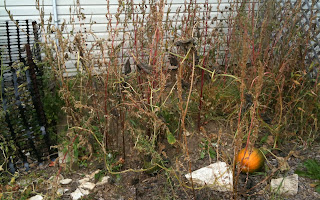 Now, realizing some of you may not be as skilled in the art of advanced gardening and botany as I am, I will go into specifics (with layman closeups) to bring to light these amazing results. 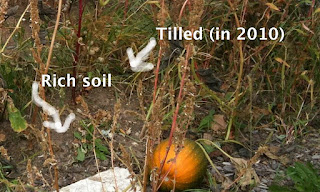 I have labored over this garden plot for nine years. Honestly! The first step was to add minerals and nutrients to it. And, what better way to do that than turn this into a rock quarry. I added limestone, lava rock, pea gravel, and basically any other icky-looking landscaping from when we moved in. I then let it sit for 4 years, knowing that only such dedication and patience would produce the kind of soil that is as rich in nutrients as my heart is filled with the deepest love for my wife.

In 2009, I exposed the soil, letting the sun and elements fuse the nutrients deep into the soil. Finally in 2010 I tilled the soil, and acting upon my ancestor from the year 1340 Rudolf Hintermeister and his practice of crop rotation...I let the soil sit for a year. Oh the anticipation!

2) A protective mechanism to protect the veggies from the animals 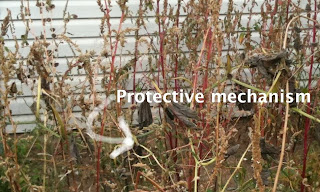 In an effort to garden in a Godly way (as I attempt all my activities in life), I crafted a "Hedge of Protection" around what would become our bountiful harvest. What better protection is there than nasty, pokey, itchy weeds! It was a perfect disguise not only to protect the veggies from animals, but also poachers. I figured as soon as my Garden to God became known in the public ether (as tweeted under #gardenofgod), great effort would be made to steal items from the garden in hopes of reproducing such magnificence. How foolish! Don't they know you can't fake Godliness!?! Losers.

3) Compost to add nutrients in the soil 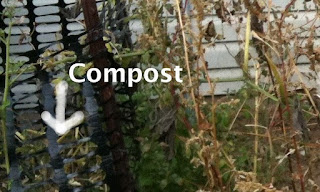 "You...are...the compost of my life", is not only the title lyric of my future hit love song, it also reflects the feelings I have towards our compost pile. Where else can I walk through 90° heat and dump the sloppy remains of yesterday's salad into a splatter-producing, stink-generating, home-of-the-flies cube?  It is an intense experience not to be underrated.

The fact that I use my grandpa's pitchfork from his farm (probably early 50's era) to stir this concoction of wonderment is a testament not only to my dedication as a husband, father, and gardener, but also a statement of honoring my heritage of sharp and dangerous tools. 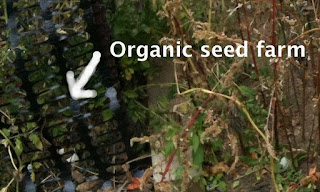 The seeds I used were not only organic, they came directly from our home. The pumpkins from last Halloween produced these pumpkins, the tomatoes came from old tomatoes that grew moldy on our counter, and the strawberries came from left-over fruit salad.

Further, the seeds were transported, by hand, and delicately placed into the garden by Garden Nymphs (OK, our two 10 year old girls kinda look like nymphs...and while it was just a chore to empty the slop into the compost pile, having them carry it over is far more delicate than our original transport idea: A deck-mounted slop cannon: simply fill the cannon with slop, fire in the general direction of the compost bin (100 feet away), and hope that at least some slop ended up in the compost. Hmm...must archive this idea for a future summer day project).

Finally, each organic seed was painstakingly placed into the garden at the optimum location for growth.  The fact that it looks like the veggies grew out of the compost pile haphazardly? SHEER COINCIDENCE! 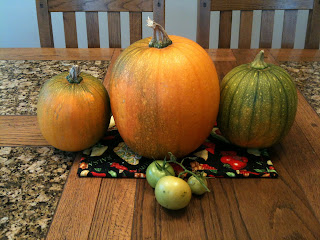 In keeping with the original gaelic meaning, I focused on "bountiful" to simply mean a large amount of output compared to a small amount of input (or is that the definition of a guitar amplifier?). Since the HINTERgarden required 0.045% of effort to produce six harvestable items (in addition to strawberries that while ripe, grew directly IN the compost, resulting in a small dry heave at the thought of eating them), I conclude this is INDEED a bountiful harvest!

Now is your chance for your voice to be heard! Comment below to state your opinion if the garden did, indeed fulfill all design requirements (correct and truthful), or if I deserve not only a slug in the arm, but an elbow in the gut (false and rather evil).