I knew it would be a good night when I pulled into the parking ramp and saw this: 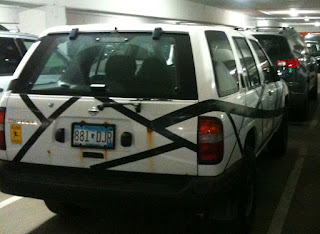 The dedication and delight that a Van Halen fan showed with this custom tape job mimicking the coolest guitar design ever was a good sign.

I walked picked up my will-call ticket, and found my seat. I had just purchased my ticket the day before and it's become the BEST way to get tickets. For various reasons, Ticketmaster releases awesome seats after 4pm the day before the show. My seat was just 5 rows back from the stage, and 4 rows up...perfect viewing.

Now, there was a glitch: Ticketmaster online only gave me 'best available', and that was section 118...nice seats on stage right...but Eddie stood on stage left (I knew that by looking at tour photos and videos...confirming the side I wanted to be on). I called ticketmaster, learned I could order by section over the phone, and got section 102...right in front of Eddie!

The lights lowered, and the concert started with...

Kool and the Gang! 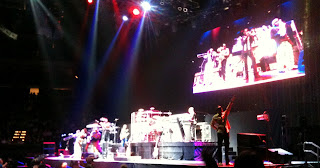 They were awesome! They had 11 guys on stage, and 3 were original members. They all played and sang great. At the end, when "Celebrate!" started, it was so fun to see all the rockers in the audience devil-horn saluting to a dance song :-) 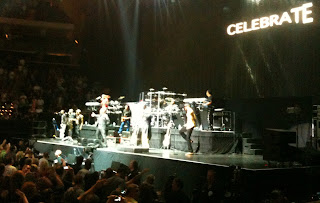 And then Van Halen started.

Wow! Eddie and Alex (guitar, drums), were in top performing shape. Wolfgang (bass) was impressive as well. He did some bass tapping that was pretty cool. Part of me wished Michael Anthony was there, but I have a soft-spot watching Eddie and Wolfgang's father-son interaction. Very sweet.

Both Eddie and Wolfgang did some impressive backup vocals as well.

He was a great ringleader. Did he sing great? No. Did he keep the audience entertained? Yup. He even did a few kicks and Karate jumps. 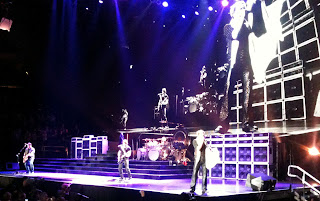 A most memorable moment was about 1/2 way through the show. They played "Dance the Night Away", and during the simmery interlude, Dave sang softly then they all came in to produce a fantastic 3-part harmony!

Take a look at this video, and start at timestamp 2:04

Wonderful! It proved he could sing when he wanted (or maybe when softer tones were needed), so I honestly don't know why he didn't sing more during the show. Maybe he just wanted to peacock around the stage...which he did a lot :-)

They played all the great songs: Ice Cream Man, Jump, Panama, and even a couple new songs that were really rockin.

At the end of the show, it was almost like they wanted to pack as many songs into the show...but still get to bed at a reasonable hour :-)...

...David Lee Roth said "Here's our last song..." and sang it...then as they finished, he yelled "You want an encore!?!"...without leaving the stage or anything...very efficient! They then played "Jump!", and he clarified this was, in fact, the encore, by carrying around a 20 ft. "Finish Line" flag while confetti filled the air. No doubt they were done :-) 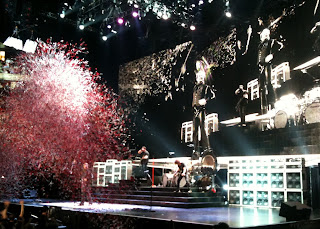 I'm so glad I went. I don't think the music could have sounded any better, and while Diamond Dave was not at his singing prime, it was a joyous night.