The Secret At A Taylor Swift Concert

I haven’t blogged in a long time, which is weird because SO MUCH has happened in my life, our family's lives, that I should be posting a couple times a week.

The problem is I start to second guess myself. I think, “Uh, oh. It's been a while. The next entry has to be awesome”…after all, all the people in the world that read this will expect an amazingly thoughtful piece of work after so many months of inactivity.

Which made me start thinking, "Why am I even doing this?".

It's not for the money, it shouldn't be for vanity.

I had to remind myself that it's for my future family: My future self in 5, 10, 35 years, my wife, my kids, grandkids...anyone who is interested. If others enjoy it? Great. But There some pretty interesting things they may want to experience through my eyes that if I can capture a glimpse of what I thought as these experiences whizzed on by, and they can learn/grow from it, then that's all I hope.

So what better time than a weird moment I'm experiencing at this second to start blogging right now! 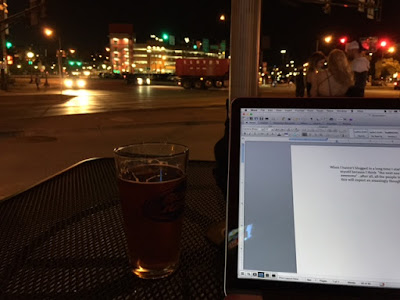 This is my view right now after dropping my girlies off to the Taylor Swift Concert. I thought I’d try to find myself an “extra” ticket by wandering the streets. You know what I found? Tons of others wanting a ticket, and 15 professional scalpers who are giddy that scalping is now legal.

I did hover (Stalk? Leer?) around the will-call window in hopes someone would shout, “Dang, I can’t believe Sally couldn’t come…what ever are we going to  do with this ticket!?!”

I never heard that.

What I did hear is, “Fraud!?!”  “Decoy” “Fake!?!” Several folks bought craigs-list or street corner (just outside of the arena) tickets, walked in, and they couldn’t enter. They were out hundreds of dollars (the sad part was a little girl was usually next to them crushed I'm sure).

That got me to the point to not even ask, “you have an extra ticket” because the only thing worse than not getting a ticket to a show I’m marginally interested in is to get a ticket that is FAKE and be out $50-$100.

I’m sure you’re thinking, “Wow, you got 26th row on the floor near the catwalk you must have purchased them months ago”.

I bought them yesterday.

Turns out, thanks to a chance AC/DC concert, I learned a secret from a wise “yeah I been to 87 concerts and never bought a ticket more than a day before” concert-yoda-meister.

The day of that AC/DC concert, I decided I wanted to go. I called ticketmaster and they said, “Heck ya, we’ve got section 102, 12th row”. I looked and it was just off the stage…so close I could almost touch Angus’ AC/DC labeled boxers (if you haven't been...don't ask).

Once I sat down I commented how crazy-unique it was to get a ticket the day of, and concert-yoda leaned over and said, “I’ve been to 87 concerts, and buy all of them between 3 and 4pm the day before the show. The radio/contest tickets get released, and you can pick up REALLY GREAT seats…far better than anything you’d get buying them the day they go on sale…and you’ll know your schedule works for the concert!"

So, yesterday at 3:30pm I look up tickets and found 2 great seats on the floor next to the runway where she walks down the center of the floor. Since I didn't have much time I chose 2 tickets only since 3 together would have been a long shot.

I got them at face-value, no risk of scalpers, and now they’re enjoying a fantastic concert. 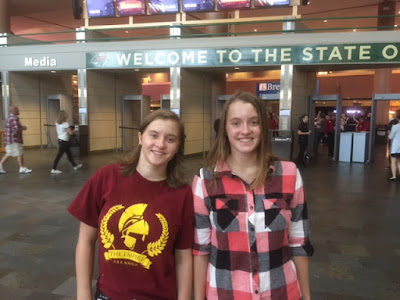 I love providing my kids concert experiences. My oldest I took to several hard-rock concerts, and the girls I bought tix for Miley Cyrus, Lindsey Sterling, and now Taylor Swift.

My next goal is to find something that my youngest wants to see. He’s unique in that he’s a GREAT drummer (at still 11), but he hasn’t found a band he can really sink into yet. We do play along with some classics, and we jam to blues and other songs to increase his chops. In fact I had him learn a “You’re a drummer? Prove it” riff.  Now he can rip off a really cool intro, beat, interlude groove, and ending that will summarize his skills. Awesome.

There ya go. soul searching, history, tricks, and fathering all in one post. Phew!

PS: Now that I’m at the nearby pub, I see all kinds of people who were looking for tickets along with me. Reinforces I made a good decision to mellow and type my thoughts (with a Surley on the side). Turns out this is a focal point for all the scalpers! So interesting to hear them talk about the night…who they scammed, how much they made with each ticket, I wonder who they know that gets them these great seats? Unless they're all fakes.

Ah well...back to my Surley.