When I come across the same topic over and over, I know it’s not coincidence…it’s a higher power urging me to write it down. Forgive me…and special thanks to Henry, Becky, and Mark for being sources of inspiration…I blame you as much as anyone.

The Gospel of Henry

Chapter 3
And then the scholar approached and proclaimed, “Teacher, I am hoping I have an iPhone in heaven....it sure will make eternity whiz by”.

A hush fell over the temple as the Pharisees and tax collectors awaited with bated breath for the teacher’s response. Would the implication of ‘boredom’ in the “house with many rooms” result in a thunderbolt deepening the scholar’s already red hair? Or maybe a remote wipe of all phone data?

“Of course there will be, my son”, said the Teacher with a wide smile. “…and the one in Heaven will run Flash!”

The disciples chuckled, but gasps spread quickly across the grumbling Pharisees and religious rulers. The Teacher chose not to pay attention…instead bending down and gesturing onto the responsive touch screen, fully engaged in the casual game-play of throwing exploding birds at pigs. But grumblings grew more and more intense. “Mine already runs Flash”, one said. “His doesn’t even run full multi-tasking”, said another.

Finally, out of the corner, tracing an apple-shaped logo over her Android, a faithful follower of the Teacher whispered to herself, “I hope we are not partitioned…between the sheep and the goats…between iPhone and Droid”.

“It doesn't look good, Becky”, replied the Teacher. Becky was surprised that the Teacher could hear her whisper while simultaneously attaining level 37.

“The scriptures clearly say”, as he rolled out the scrolls… 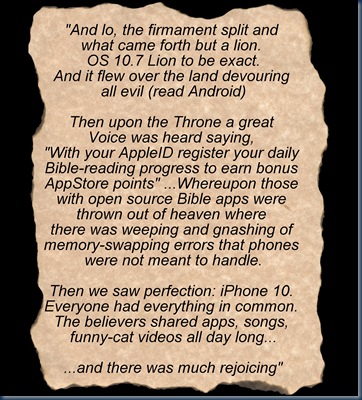 Becky hung her head in despair. “Then am I doomed? I hoped to have redeemed myself by having an iMac and an iPad.” 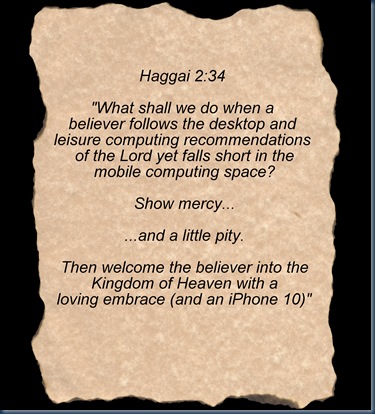 Convinced at the Teacher’s knowledge of the scriptures, and frankly surprised at how technically prophetic Haggai was…

…all who had white ear buds to hear

…all who had augmented reality apps to see

Thus endeth the Gospel of Henry.