Where: Soldier Field, Chicago
Went with: Wife
"It was one, magnificent, beautiful day in the city of blinding lights. With pride, we were in the promised land. In mysterious ways we did go crazy tonight in the streets with no name. With or without you we got on our boots and walked on to one tree hill, and, at that elevation, was the moment of surrender."
If that's all you have time to read, it sums up the show...and our adventure. That, and this footage of my favorite song of the night from our seats (section 126, row 18, seats 17, 18...a mere 6 seats less and we would have had a spotlight tower blocking our view of The Edge...phew that was close!):
~~~~~~~~~~~~~~~~
Our U2 adventure was over two years in the making.
From the excellence of the show, I'm convinced U2 decided to practice just a little extra for us. 30 years of practice to be precise...each tour and album improving upon the last where they would be better than ever by the time they hit Chicago in 2011...just so we would have the show of a lifetime.
But that seems normal for what U2 does: They put every ounce of energy and creativity into every facet of the show so we could have a U2 adventure we'll never forget. The whole experience was like a masterclass in never letting up on being as excellent as you can.
Our adventure started when we tried to get tickets for the first "360" tour show in Chicago back in 2009. No luck. Sold out by the time general public tickets were on sale.
Solution? Join the U2 fan club for $50. We got pre-sale codes and an exclusive remix CD. We were ready in early 2010 to buy tickets and decided on spending $100 each vs. $250 each (reality has to seep in at some point), Reserved the hotel, and waited.
Then Bono had to hurt his back and the whole leg of the tour was rescheduled for 2011.
Fast forward a year...different hotel (Hilton Garden Inn...excellent price, location, and rooms!), same tickets, and we were off on our adventure!
On our way we stopped for Rocky Rococo pizza (the best pizza ever...partially because Rocky's is where we would go when we dated: Sunday night dinner, then a walk around Lake Calhoun...perfect combination for falling in love). Arriving at 4pm we had just enough time to relax and get ready for the show.
Nothing gets you familiar with a city like its subway system. We took the Red Line south to Roosevelt, then walked to Soldier Field. 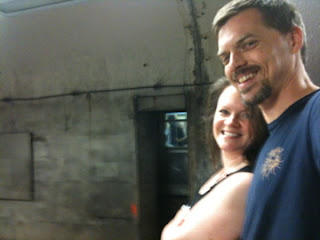 But not before having a quick bite at a local sandwich shop, where we were entertained by a local singer...who performed a GREAT acoustic version of "Magnificent" (...and since Bono didn't sing it, we were glad we heard it live during dinner) 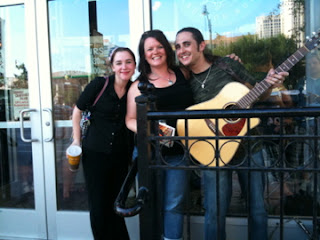 Our walk to Mecca, er, Soldier Field with 64,000 of our closest friends ended in some pretty good seats and a sense of wonder at the huge-ness of the facility and stage apparatus. 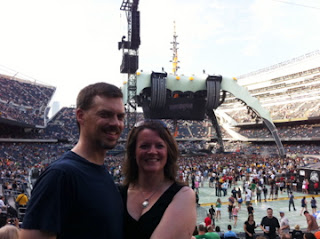 U2's attention to detail continued to amaze. For example, we were far enough away where the audio was 1/2 measure behind the guys on stage (I noticed this during sound check). But, the jumbo-tron was on beat. I thought it was great that they delayed the video feed to synch up with the audio coming at us. I suppose  they figured those close enough to the band wouldn't hear delays and wouldn't bother with the jumbo-tron.  Pretty cool. The band played wonderfully and the mix was great. Light show was spectacular and the whole spaceship-stage-thing had plenty of surprises. Again, it was like they said "This stage looks great. How can we make it excellent?" 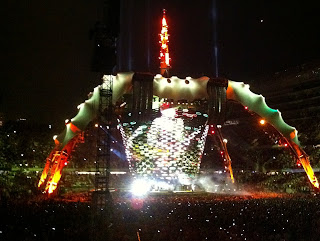 Other observations: Bono and Edge seemed visibly moved when we all sang along. He thanked us. He could have said, "sing louder" or, "not as good as it could have been", but he just said, "Thank you"...with his hand on his heart.

During "Where The Streets Have No Name" when Bono sings about rain...it started to rain. Just a few drops for a couple minutes. Then when the song ended...so did the rain. I'm still wondering how Bono did that.

The last song of the show, not played live since 1987, was a tribute to a friend that died...25 years ago that week. Amazing song...I had never heard it before...but I'll add it to my playlist now (Take a listen to hear a great impromptu song from our show).
Last observation: My wife's iphone 4 takes great video. Take a look at the highlights of the show...

Once the show was done, we had a choice: follow 64,000 fans to the Red Line and wait an hour to get the train back to the hotel, or just walk.
We decided to walk.
Perfect decision. BEAUTIFUL summer night, walking with 1000 of our closest friends (including some Irish folks...did they fly here just for this show?). The lake was smooth, air was warm, and my concert companion was simply lovely.
The next day was just as beautiful. We found more adventure awaiting us in Chicago. 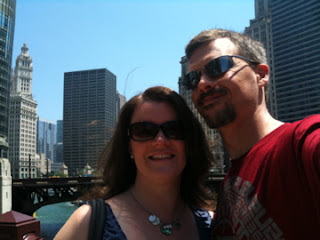 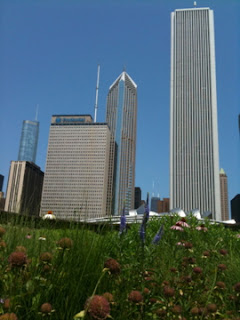 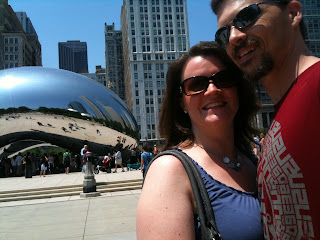 to the Bean
After a great walk-about, we headed back home (with another stop for Rocky's), and returned to another 2 days of vacation. After all, I'm just following Bono's direction: He said he talked to the Mayor of Chicago and he extended Independence Day to Independence Week.
Thank you Bono, Edge, Larry, Adam. Thank you Chicago. Thank you Rocky's. You exceeded our expectations and gave us memories to last a lifetime.
Posted by GregHint at 3:33 PM