Dear China, Thanks For All The Food!!

Regardless of the recent debate we had in how to run a society of 1.3 billion friends, I have to tell you: You have some awesome food.

Not only that, but you should know that our relationship deepened because of two things: 1) The awesome food, and 2) that the awesome food was paid for by others. Nothing on God's green earth (can I say God in China? Only in state-sponsored churches? Well that's barbaric too...let's discuss that later over some cucumber juice and dumplings) makes food taste better than when it's paid for.

My main dining experiences were at the endless buffet at Le Royale Meridian hotel. I could choose from Chinese, Vietnamese, Japanese, and American. Although, the choices were so grand, I never even tried the american food 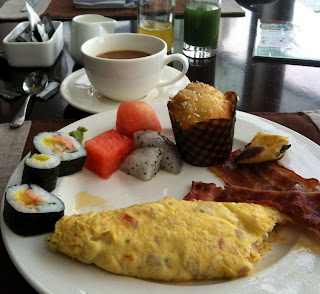 Notice the sushi. For breakfast!! I loved you, China! Your international acceptance is an amazing thing. Another morning I had poached eggs, and one morning some sort of morning dumpling. Yumm-o.

For my first lunch, I was in the middle of Shanghai and ventured into what seemed like a fast food Chinese place. I pointed at some meat dish, and iced tea. 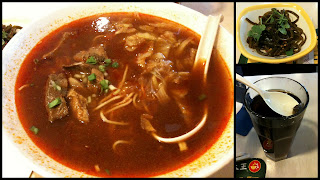 What I got was a Chinese noodle soup thing with lots of meat, a side of seaweed, and not iced tea, but hot tea...with what looked like dandelions as the ingredient. It was fantastic tasting!! Oh, and my 'slurpy bad manners' in America? Completely acceptable in Shanghai, and even looked as a sign of respect. Did you feel my respect with each slurp? I hope so.

For my other lunches, we had daily buffet at the hotel. That was ridiculously delicious. 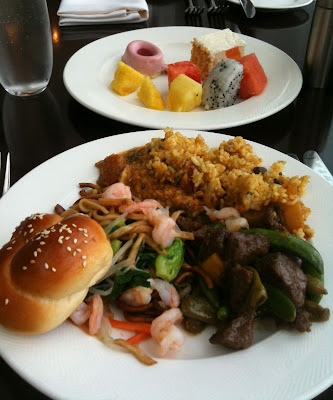 Now China, I love your food, but when you offer Indian curry dishes in the same buffet along with your Chinese flair, and round it out with some dessert-fruit combo thing, it makes me want to hug something.

I had two outstanding dinners...both out on the town. Shanghai doesn't have a whole strip of restaurants, but are kinda tucked away...you really have to find them...as opposed to the massage parlors and pearl warehouses. What's with that?

The first dinner was in a restaurant hidden in a huge mall with my IBM China colleagues. They ordered for us, and it was fantastic! We had all kinds of dumplings, some salted fish, and chicken soup...with chicken necks and feet in there (OK, so while I had the soup, I did not partake in the solid contents...it reminded me of when my wife makes chicken stock...delicious liquid but crazy weird parts of the chicken). We ended the night with "Rose" ice-cream. Flowery and Weird.

The second dinner was an accident. We were told of this fancy-dancy restaurant and walked 30 minutes to it...only to find they don't take reservation and it would be 1.5 hour wait. We were too hungry to wait...so we walked to a place where the only English was the subtitle "Grandmas". Sounded inviting! 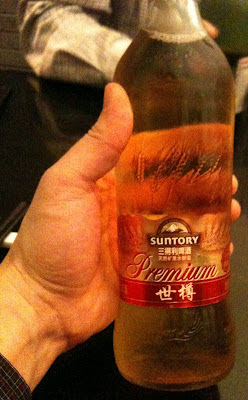 Yes, it was large and cheap and refreshing. Much like you, China (was that crass? I'm sorry. Get used to it)

The menu had pictures with some English...I became adventurous and had the Cuddle Fish. (those crazy squid-like things that change into a rainbow of colors). And to be technical, I had BABY Cuddle Fish. Yes. Cry all you want...doesn't make them less tasty. 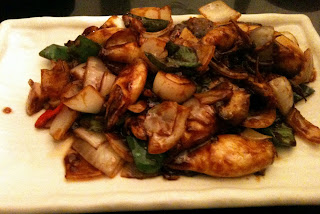 Just in case you wanted to see, here's a close-up of one.

To be totally honest, there were some queazy moments when I realized they were not stuffed with cheese...but stuffed with Cuddle Fish innards (Mmmmm...not yum)

BUT, in the end, we had a delicious meal, and a fantastic night.

The final day I explored the city myself and walked through very traditional Chinese neighborhoods. As I walked through the 'old city', the pungent smells from the food vendors were very strong, and made me want to experiment, but was afraid. It's true, China, you are a mystery, and I did not want a living souvenir in my guts to bring home only to discover 3 months later. Although, the lines for the dumplings and 'everything that walks' on a stick were long, so obviously the Chinese tourists liked them.

In the end, I just decided to finish my walkabout in a coffee shop near my hotel. I ordered a latte, and sat down.

All of a sudden, I overheard someone say, "Yes, a Tiger on tap". 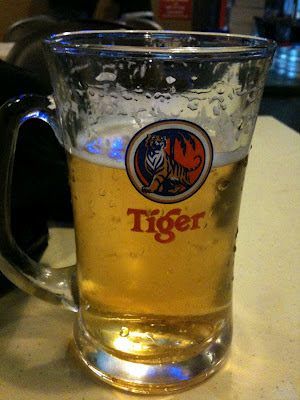 Oh. My. How. Refreshing.

I decided at that point that my China adventure was done, and came back later for dinner to enjoy the pub, write a patent, and have probably my most satisfying meal: 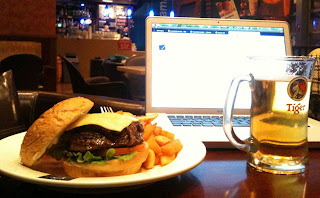 Amazing. Not sure if it was how it was made, or just the fact that it was sooo familiar...down to the fries...but I have never been so satisfied with a meal than I was at that moment.

~~~~~~
China, thank you. your food has made me enjoy many of our memories together.

Until next time...keep the dumplings warm, and thanks for all the Cuddle Fish!
Posted by GregHint at 9:00 PM