When we get to Heaven, Monday nights will be “Les Paul Trio” night. Crazy thing is, it won’t be any different than Monday nights at the Iridium in NYC. This is just my second time there (The first was with my wife in Sept 2009), but each time I experienced this “bubble of Heaven”.

As soon as I walked in, people are smiling. There isn’t a large crowd so I get a table that’s butted against the stage. Apparently this place isn’t very well known. Or it’s well known but not many believe it’s really that great here. Every person greets me and makes me feel welcome. From Les Paul’s engineer of 25 years (below),  to main guitarist Lou Pallo (farther down), to the couple from Montana who let me sit in the front table with them. They all greet me. They all assume I’m way into guitars just as much as they are. They are all there not for themselves, but to honor the Man whose name is on the door. The food is great, desserts are great, beer is great. And, the guitar talent flows like milk and honey. 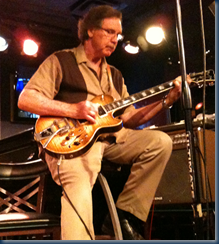 Throughout the night we clap, gasp, cheer, and laugh at awe with the music pouring from the stage. At first it makes me want to throw all my guitars a way knowing I won’t be able to attain the perfection coming from stage. But here I’m accepted for who I am. They assume the best out of me. They’re just happy I’m there, listening and learning…and it makes me want to become better.

I wasn’t even supposed to be there. It was a last minute flight to NYC to teach the first of a 2 day workshop I developed. While I planned on working, I didn’t plan on the pure joy I ended up experiencing at the Iridium on Monday night.

The night had guest performers. I wasn’t familiar with all of them but wow, where they good. Seems the best guitarists serve the ‘stars of the day’, and while the stars tend to fade, these guitar servants keep playing well into their 80s. 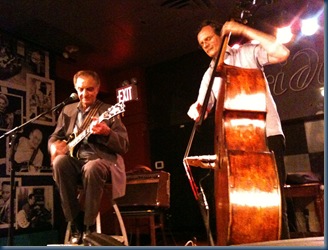 First guest was Blondie Chaplin, who sang and recorded with the Rolling Stones and Beach Boys. 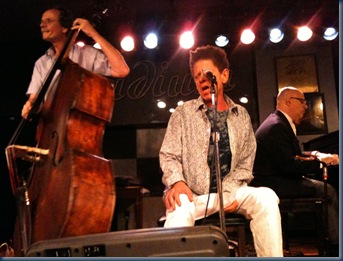 He sounded awesome. He was just sitting in the back and was asked to come up. Very cool.

The main guest was Bucky Pizzarelli. I felt like a newbie since I didn’t recognize his name, but his guitar partner, Frank Vignola and him ripped amazing guitar licks for the next 30 minutes. At 84, he played some beautiful music. I didn’t know much of it, but their artistry made the whole experience inspiring. 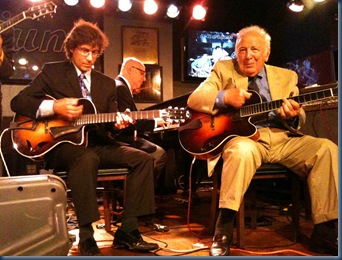 Most amazing is that each got more joy out of playing rhythm for the other than soloing. They really did want to serve so the other could shine. When the other did shine, they smiled. At the band, at me, at all of us. With one smile they were shouting “Look at this guy play! His God-given gifts are simply awesome! What a privilege it is to support him!”.

I left wondering: Could this bubble of heaven show up in other places? Could every day be filled with joy watching another shine while I play rhythm in support? At work? At church? At home? I might be surprised to learn that while my support makes them shine, it makes me better, too. Even if I try for once a week…It’s worth a shot. 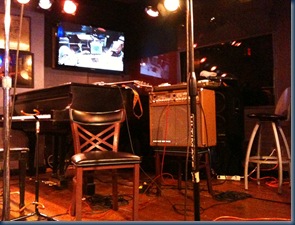 Here’s your invitation from me to shine…

…see you on Monday nights…

…I’ll be the one playing rhythm for you.