Ya. I’m gonna get in trouble for this one…

I LOVED the Ted Nugent concert. I left me so inspired to LIVE LIFE! Nowhere else have I experienced such passion and purpose, or to paraphrase, “…to suck the marrow from the freshly-killed gift of life that feeds the fire-breathing, rock-igniting soul for another beautiful day of freedom-filled defiance-breeding ROCK. LIVE AT THE HIGH DECEBELS”

He is 62 years old and rocks like nobody else. He’s got some killer guitars, including 2 custom PRS (zebra striped and camouflage), a few Gibson Byrdlands, and a couple Gibson Les Paul guitars. Below is his American Flag Gibson Les Paul: 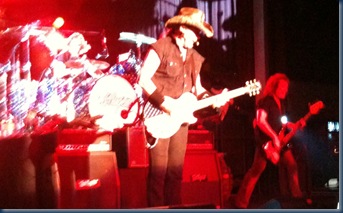 I felt summoned to the front of the stage to declare from the TOP OF MY LUNGS: “I, Greg Hintermeister, Declare to LIVE LIFE filled to the RAFTERS with purpose, passion, drive, DISCIPLINE, and Laughter! I will wake up EVERY MORNING THRILLED TO BE ALIVE and squealing with delight thanking God for what I get to do this VERY day…IT’S A FREE-FOR-ALL!!!”

I know. I should be quoting bible verses…but The Nuge lit the fuse…

I should also say I’m reading his book “Ted, White, and Blue: The Nugent Manifesto”. I declare EVERYONE should read this book. I don’t care if you agree with anything he says. He’s got strong opinions with logical arguments to back them up. If you don’t agree, good. You’ll be given the gift to define YOUR arguments against his. It made me think hard, “Well, what do I think about that?!?” I consider that a must-read. I’m going to have my oldest read it, not to tell him what he should think, but to show him HOW to think and debate, and decide for himself what his PASSION is.

DISCIPLINE!!! He spoke of pure, honest, GET-OUT-OF-MY-WAY-I-DON’T-WANT-NO-HANDOUTS-I’M-COMING-THROUGH kind of discipline. I could tell from his playing (and TV, writings, and volunteer service). He practices hard. He plays hard. His band practices and perfects. They were one rockin’ band (did I say he’s been sober for 62 years?). I was blown away at his skills.

OK. Back to the concert: This is his “Hurdle the Weak and Trample the Dead” tour. He played at the Surf Ballroom, the location of Buddy Holly’s last concert. It was a really great place…hotter than a pistol, but maybe that made the night amongst 2000 other Ted Heads even more memorable.

We got there at 7:30, doors opened at 8, so when we walked in, we could walk RIGHT UP to the stage. 4 feet away at most. Here he is with his Byrdland. Georgous guitar. 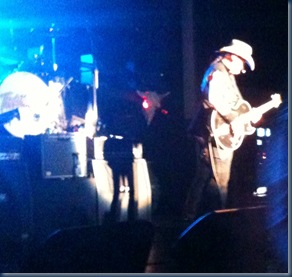 Oh, and guess what? He busts his CAJONES to give us a great sweat-drenching ear-blowing show. But he also works hard to provide for himself, his family, but even more to provide for others. He could be sitting on his laurels while his Cat Scratch Fever residuals roll in, but in his ‘spare time’ he’s, dare I say it, doing God’s work.

When he’s not on tour face-melting (6 MAMMOTH 5150 Peavey head/cabinet guitar amps blasting away…we were almost beaten up when we started to put our ear-plugs in) he runs, among other things, ‘wounded warrior’ and ‘cancer-kid’ hunting/shooting events. I don’t care what you think about his opinions, the fact that he spent his own time and money giving a 6 year old one last wish to go hunting…the smile on the little kids face…is golden. Or the wounded warrior, former sniper, paralyzed with only a straw to communicate: Uncle Ted spent his own $$$ developing a way so the warrior could sight the gun and fire using just the straw in the mouth. His joyful smile gave me chills (in a 90 degree room) and a lot of respect for The Nuge.

OK. Again, back to the show: His opening act, Val Halla, a girl rocker…rocked out. The caption says it all… 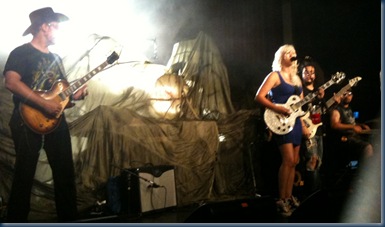 “A thing of beauty…the curves, the neck, what a sparkling blonde piece of work.”

Of course I’m talking about the guitar. LOOK AT IT! She just rocked with that thing…some sort of custom Guild. We talked with her a bit and then mostly the bass player. He seemed really cool. A funky and solid 6-string bass, wicked drummer, and a great lead.

Back to Dr. Ted. The Nuge closed with a great encore, leaving everything on the stage. One odd event, though: The Surf Ballroom security yellow-shirts wouldn’t allow ANY photos…including from phones…of course that means I only took 60 photos instead of 100 :-) Really funny thing was the ‘man in yellow’ was in the middle of a ‘no picture stare’ while The Nuge was yelling “DEFIANCE!!!”. 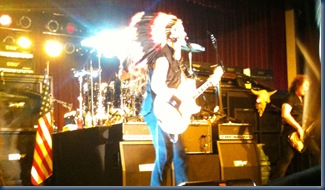 There ya go…an inspiring night with St. Nugent. Ya he swore. I actually learned that some of the fiercest swear words are compliments :-) But for me, I could learn a thing or two about taking a big bite out of life and not only aspire to live with a purpose, but actually DO IT. LIVE for something. BELIEVE, be passionate about making a difference.

Now I’m LIVING. I’m PLAYING. I’m LOVING, I’m WORKING with Fire in my belly to do what I LOVE!

LIVE WITH A PASSION THAT CANNOT BE SQUELCHED. SET FIRES! BUST EARDRUMS! LIVE AND LOVE AND WHISPER AND YELL AT THIS AMAZING GIFT YOU GET TO WAKE UP FOR EVERY DAY CALLED YOUR LIFE!!!