…at least that’s what my emotions went through at the Marc Cohn concert. 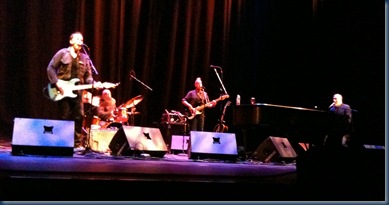 Marc Cohn’s songs impact me like no other singer/songwriter. I don’t know why he isn’t more well known. If I were to name my top 5 songs, I think 2 or 3 would be Marc Cohn songs.

I wish I could write songs like his. His vocal range is a perfect match, and our piano/guitar styles are similar. Maybe I haven’t tried because when I’m sad and blue, and I’m trying to convey how I feel, I hear a Marc Cohn song and think, “Yep, that’s it exactly”, and then move on since I can’t improve on what he captured.

The almost-idiotic thing is that I nearly decided not to go. I had traveled SO much in 2010 and I had barely set foot in the house when the pre-sale email appeared. I hadn’t listened to his music much lately, and I didn’t know if he was still relevant in my life. But, I did buy them and ended up getting a first row seat.

It wasn’t perfect, though. I only got one ticket and not two. I do remember asking my wife if she wanted to go, but it was in December and the last thing she wanted was another commitment. I should have just bought two tickets as the night was a journey I wish we could have shared.

From the first chord, the music filled the theatre, and my heart. Even the placement of the instruments was perfect. Notice how the guitar amp was pointing directly at me? The combination of clean electric and piano on these songs was breathtaking.

He is very much a musicians musician. He talked about his songs, how they were inspired, and how blessed he feels to still be doing this after 20 years. His first album (with Walking in Memphis and most of his other hits) was written in a 3 month period after his hero, James Taylor, said in an interview that when he has writers block, he physically relocates to another part of the country. Marc then took a 2 week trip to Memphis, soaked in the culture, people, places, then three months later returned with 6 hits. 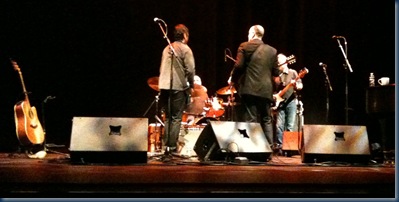 The players were so good and loved the music so much that many times they just turned to each other and let the music pour out…and since this was his last show before returning home, they played for nearly 3 hours.

I think at times they forgot we were even there…which is fine with me.

Thank you Marc, for giving me music that captures my adventurer’s heart so well. You’ve inspired me to get back to writing songs on piano again…

…maybe there’s a song or two in me yet.