I love my land. I love mowing. 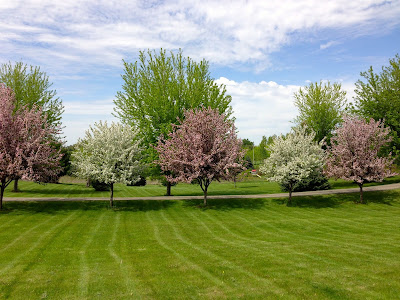 "I have to mow" is not just a phrase, but more like an ejector seat catapulting me into a 2 hour slot of pure joy…especially useful when 4 kids are crabby, crying, or back when they needed changing.

I can think of whatever I want while I mow...the next section of the soundtrack I'm writing (The Ghost), my next invention (my 'one more thing' patent), or best of all, I can think of absolutely nothing! Mowing has the gift of requiring just enough brain power to keep from getting bored: focus on a straight line, decide how to cut around the next tree, or just enjoy the sun/shade/birds/clouds (and occasional B-27 bomber visiting me from the nearby airport).

First Love:
In 2001 I bought my first real riding mower. 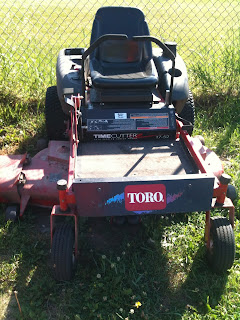 Since we have 5 acres, I spent hours debating a zero-turn or traditional…it all came down to time on task. I calculated (and mapped out on paper) that with a 52" zero-turn, 6mph, I could cut the yard 37 minutes faster than a 48" traditional 4.5 mph. It cost more ($5400) but for the next 10 years I knew I made a great choice. Sure there were repairs (probably $700 total over the 10 years), but quite happy with my first mower.

Then in April 2012, I saw tears. Black tears. My Toro was bleeding oil. I changed oil regularly, and figured it was a loose something so I changed filter and oil again...but it kept leaking. 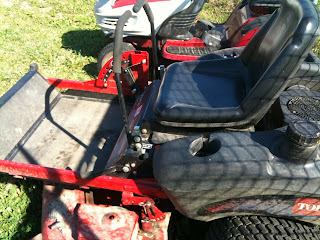 I was towing weed killer up a hill and the left transmission snapped. I heard a big grinding sound, slid backwards, and nearly bent my 30 gallon weed killer hauler in half. I had to travel the next day for an Analyst event so in the O'Hare airport I heard the mechanic call.

Mechanic: "I have some bad news"
Me: (to self) That sounds expensive
Me: "Ya?"
Mechanic: "The left transmission has 10 years of grass compacted inside of it, and cannot be repaired. You really should have blown the grass out after each mow"
Me: (to self) I bought it from you…maybe you could have told me?
Me: "Oh." (MN nice at its best)
Mechanic: "The repair is $1200 and I don't think the right transmission will last much longer so total would be $2400"
Me: "Oh." (that's HINTER for 'dang-flang-sucky-rang-a-dang')

Mechanic: "I don't think it's worth repairing"

Second Love?
So off I went to find a new mower.

I only considered another zero-turn and found one I liked…54" Gravely…after tax it was $4800. Ah well. I had it saved up so I walked in… 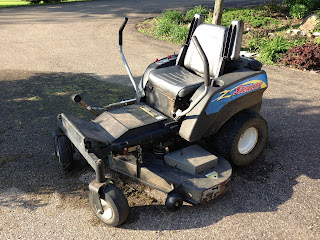 Mr. Sucky:
I should have known by the brand name, "Sutech" that I was in trouble. Turns out it stands for "Sucky Technologies".

My first mow? Painful. This mower went from zero to fast instantly, and I was actually popping wheelies (now you'd think this would be really cool…especially if flames came out the back…which eventually they did…but not when I'm just trying to mow the grass!)

My third mow? Mr. Sucky broke. Not just in a 'patter-patter-burb-patter' subtle way, but in a CLANG-CLANK-GRIND-STOP kind of way. I turned off the mower, pushed it back, and saw metal pieces (of which I later learned was the clutch) in the grass.

The store was not very helpful but did take it for repair. Since Sucky Technologies was out of business (surprise) it took a while to find parts, and then they went on vacation. It took 5 weeks to get it back and repeated calls…not a good customer experience.

In the mean time the grass kept growing so I borrowed my neighbors (PS: He's the best neighbor I could ever have).  End of first mow with his John Deere? I didn't turn it off fully so drained the battery which wouldn't re-charge…$78 later he was the owner of a brand new mower battery.

I was so frustrated that for a brief moment I considered buying 5 of these for a total of $500. 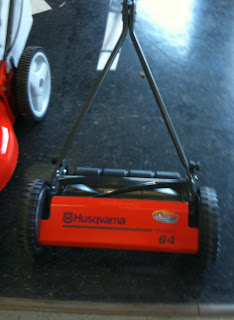 Imagine a combined 100" cut, no gas, oil, or hefty repairs! Plus, our 4 kids and myself would get a great workout once a week. I could see us mowing like a Zamboni team across our 5 acres!

Alas, that dream died and after 5 weeks and $300 later I got Mr. Sucky back, mowed a few times, and thankfully it got cold and started snowing.

2013 Renewal?
After hearing my prayers, it snowed a lot in 2013…even on May 2nd! I was so happy since that meant I wouldn't have to ride Mr. Sucky.

DANG. I can still drive it though so I bring it to the out-building and…

…see SPARKS flying next to the fuel line. MR SUCKY is trying to kill me!

I turned on my heel and never even considered repairing Mr. Sucky. Good riddance.

Trusted Companion:
I learned my lesson. I needed a new mower that would last me a long time. I looked at all my places (other than the place that sold me Mr. Sucky), and decided. However, having recently talked to my other awesome neighbor about how he really likes Sears, I decided to take a last stop at Sears. I don't shop there, but my 13 year old Craftsman snow blower is still kicking...

Me: "I want this one"
Seller: "Great!"
Me: "Does it come with an optional hitch?"
Seller: "No, in fact if you want to haul, don't get a zero-turn"
Me: "Why, I did on my old one and others come with optional hitches"
Seller: "Well we are hearing that the individual transmissions on each side of zero-turns can't really handle the hauling of heavy stuff"
Me: "Like 30 gallons of weed-killer?"
Seller: "Yep. The transmission might snap."
Me: I think I love you (to self)

So the seller steered me away from the expensive one to a cheaper traditional 54" cut tractor. He threw all these deals at me. Then he mentioned the 5 year at-home service plan for $500. Steep, but with all the discounts, and tax, I was still only paying $2400…for 5 years of joy-filled-even-if-it-breaks-they-come-out-to-fix-it mowing. 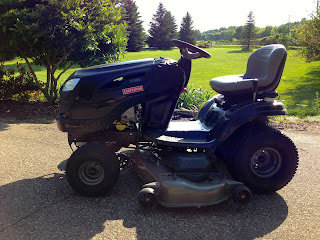 Now I'm happy again. I've mowed twice, hauled weed killer, and it is just great. Not as fast nor pod-racery as my first love, but so far very dependable and more designed for what I need it for. Maybe that's what being an adult is all about…not settling, but realizing the uncool things really are the best for the real world...

...but if it's dependable and reliable, it might just be the mower I ride into years and years of sunsets. 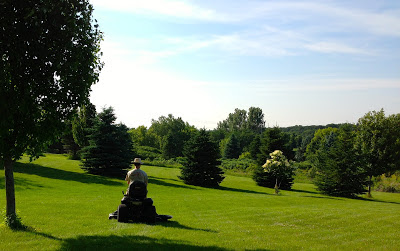 Stay tuned next time for how I plan to train our 'working dog' to mow the lawn or scrape the driveway from snow or other fun work...
Posted by GregHint at 6:33 PM