While on vacation in Ft. Meyers last week with my wife's extended family, I found myself thinking some pretty deep thoughts.

As a public service I am sharing some of the deepest:

I'm not usually the one that goes grocery shopping for the family, but I've helped enough to know what we usually get (PS: the wife is an amazing shopper. She gets super healthy stuff, organic when it matters, and even a small something sweet). However, the wife and I had to pick up food for the week at the local Publix while in Ft. Meyers beach.

...when the food you choose is what you have to carry 2 miles home with...you have an ENTIRELY different perspective. It seems that the more healthy items are top choices for keeping the bags light and few.

For example: Pop? No chance. I'm not carrying pop for my kids. It's heavy! And chips? While not heavy, they take a lot of space...and more bags = harder to carry (instead we got un-popped popcorn...much lighter per ounce eaten).

I never like getting sandy...until I do...
...and once past that barrier, I help build some pretty cool sand creations (and have tons of fun while doing it!). My favorite creation I helped my girls make is a Mouse head...that grew an alligator's body. A Mousigator... (my better half suggests Mousidile). Later we built a mouse with an alligator's head; an Allimouse. Here's the finished creation (Wren made the snout...pretty good, I think) 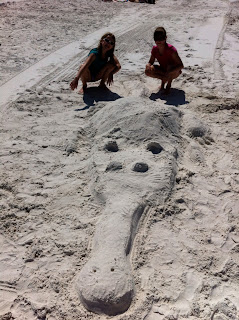 The next day my 3 year old niece wanted to make something so we created a small mouse head. It was great to briefly have something in common with her...even if it was a small mouse head with a flag poking out of its ear. She then wanted to draw the mouth and asked, "Is it a happy mouse?" I replied, "Yep! Well...it was happy until the 'incident'". That was a pretty good bonding moment I tell ya...

...and leaves the creation of the story describing the dark and sordid past of this particular mouse wide open :-)

Maybe there are other things I don't like doing just becaues they're messy, but that once I get past it, I find they are quite fun.

While looking at some photos of the beach, I noticed that if I focused closely, I could gain a much greater appreciation for the various sea creatures that shared the beach with us...

Here's the original that Karyn took while we made AlliMouse...do you see the creatures? 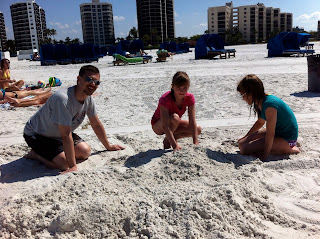 Here is a focused shot of them: 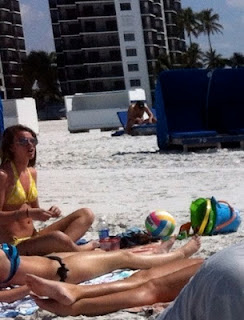 Here's the original of Allimouse as it looked down the beach: 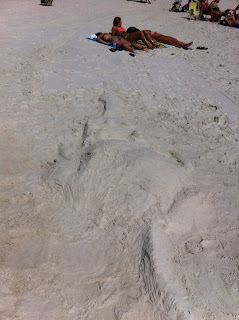 Here is a focused shot: 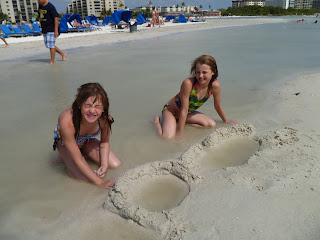 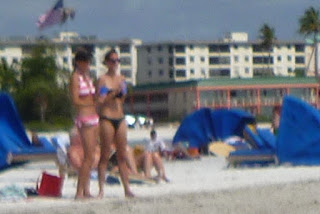 Beer on the beach is good. Really good. I usually avoid having anything in the daytime, and I learned that while flying beer really goofs with my head...but on the beach, with the salty air, and the sun, and the cold lime-tinged drink...it is a perfect combination.

Seafood in local fish restaurants is just.so.yummy. The best places are so basic  (no windows, plastic utensils) that it's obvious they spend all their time on catching and cooking great food. I also learned a big lesson: fried in seafood-lingo does NOT mean "pan-fried", it means breaded and deep fried. I am not a fan because you don't taste the seafood as much as you should. Broiled is definitely the way to go. Especially scallops. I LOVE big 'ol scallops.

Finally, and deepest thought: I learned why my towel always hangs on the left hook...why my water glass is the left one... and why I sleep on the left side of the bed...

...because my wife is always right.
Posted by GregHint at 8:42 PM