It started with one of my daughters saying, "Ya, Uncle David found them!"

"Where!?!", I yelped as I jumped from my afternoon slumber on the beach. She pointed in the general direction and I started running...you know, that run that makes you think you look like Magnum PI running into the surf, but really makes you look like Ronald McDonald sloshing through a McFlurry. I was on a mission that started in 1984, resurfaced once or twice a year when I happened to wade into an ocean, and was determined to conclude this very day!

To finally catch up (even briefly) to my brothers unreachable 'cool'.

You might think that after living with a brother for nearly 43 years that I'd get used to his 'cool'...and that it came from some unknown, mysterious well bubbling up 'cool' through his easy-to-tan pores...so it would be impossible to catch up to it.

I know where his 'cool', came from.

Yep, and not from some rare vanilla bean that we're not supposed to eat while south of the border, but he did anyway, and after a weekend of hallucination and fever came out of it with feathered hair, friends as far as the eye could see, and a mean pickup basketball game.

No. His Mazatlanian "cool" was bestowed upon him when he was taught by an old local to...hunt for sand dollars.

I remember it clearly: I was sitting in the sand making my really neato 'mighty-mouse' sand castle (complete with 'go speed racer' moat), and my brother (glowing from his just completed sand-dollar-apprenticeship) walks up with a tube-sock-full of recently living sand dollars. He said this guy taught him how to hunt for them...that you wade out to your shoulders, sift your feet around, feel a prickly circular item, dive down and receive your bounty.

I was in awe...he was so COOL! In a flash of excitement to prove my own "cool", I rushed out until the waves lapped my shoulders...sifted sand with my feet...and...

We flew home. 2 years later we went to Hawaii, and I secretly waded out to my shoulders, sifted feet...and...

I learned that sand dollars are not the only thing that live just under the sand. So do sting-rays, and other slimy-goopy things that really should not live near a beach.

Editors note: I suppose this could be a "how to live your life" axiom: Your mission in life will be fraught with slimy-goopy things...whether you proceed or not will tell the world what kind of person you are: A "little-school-girl-screamer" or ... well... "Cool".

I was not Cool. That incident ruined my mission for quite some time.

Years later, as I traveled the world for work, and went on beach vacations with my own family, I occasionally resumed my mission...Miami, Myrtle Beach, Daytona Beach, Sea of Cortez, Mediterranean, Mexican Atlantic, Sydney, Mississippi River (hey, ya never know), Singapore...

Then one day (meaning yesterday), the mission came to a head...with the announcement from a REAL little-school-girl that sand-dollars were out there to be found.

I ran out until the waves lapped my shoulders...

...sifted my feet around 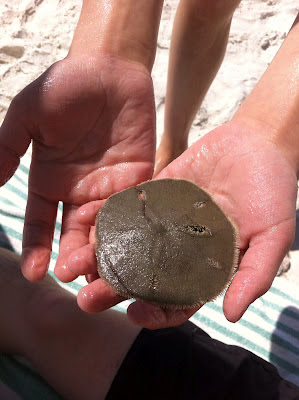 I did it. An unexplainable rush came over me...until I look around and it seemed everyone was pulling them up (including my 2 little-school-girls).

Did I succeed in even temporarily approaching my brothers' "Cool"?  Hard to say. It only took 28 years to accomplish this mission...including several incidents of little-school-girl-screamitis...repeatedly; AND I wasn't manly enough to capture them, instead honoring the resort's catch and release rule. But, I DID accomplish the mission, so maybe I came close.

Oh, and my wife just reminded me that I can play a mean guitar...so maybe I didn't have anything to prove in the first place.

PS: Later that day, the afore-mentioned Uncle David pulled up a star-fish...and didn't scream like a little school-girl, and proceeded to show it off to the whole beach.